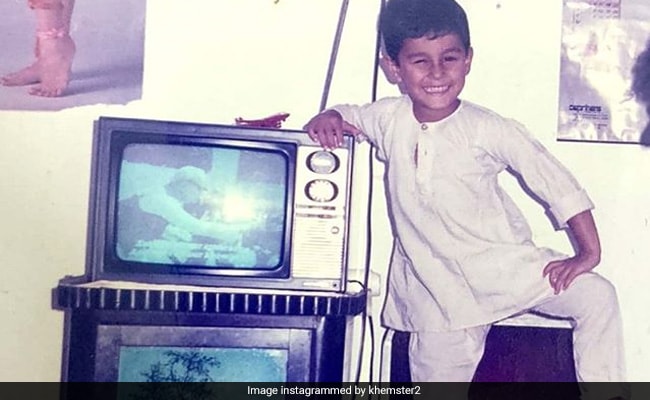 The actor shared this photo on Instagram (courtesy khemster2)

Kunal Kemmu set a throwback kind of a mood on Instagram with an adorable photo from his childhood days. Kunal Kemmu, who worked as a child artiste in the Nineties, Instagrammed a photo of his pint-sized self, in which he sports white kurta-pyjama and a rather cheeky expression. In his caption, Kunal said that 'just in case' some fans fail to recognise the little kid as his younger self, the box television 'kind of gives it away' that it's a major blast from the past. "Flashback! The TV kind of gives it away anyway just in case the little guy didn't," Kunal captioned his post. Meanwhile on his Instagram story, Kunal Kemmu described his expression in these words: "Happy go lucky kinda guy."

TBH, one look at Kunal Kemmu's throwback photo will remind you of his playful character in Hum Hain Rahi Pyar Ke. Kunal Kemmu was just 10 when the film released. Aamir Khan played his uncle.

Flashback!! The tv kind of gives it away anyway just in case the lil guy didn't

The 36-year-old actor is indeed of the "happy go lucky" kind as he believes in "Hakuna Matata... it means no worries." Borrowed from The Lion King, 'Hakuna Matata' is a Swahili phrase, which translates into English as "no worries".

Kunal Kemmu's acting debut in Bollywood was as a child actor in 1993 film Sir, after which he also featured in films such as Raja Hindustani, Dushman, Zakhm and Bhai. Kunal Kemmu's filmy streak often spills onto his social media posts and here's one in which apparently '2019 calling 1993' happened.

Kunal Kemmu is best known for his roles in films such as Kalyug, Go Goa Gone, Simmba and Golmaal Again. He was last seen in Kalank. Kunal Kemmu is married to Soha Ali Khan and the couple are parents to a daughter named Inaaya.