This Pic Of Shah Rukh Khan, In London For Dunki, Has Gone Viral

Shah Rukh Khan is shooting for Dunki in London 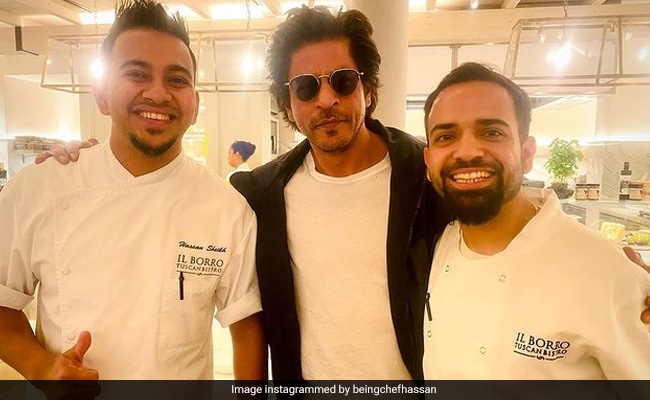 Shah Rukh Khan recently jetted off to Europe where he is shooting for his next project, Dunki. A few pictures of the actor had gone viral earlier when he was spotted on the sets of the film. Now, some more pictures of SRK are doing the rounds of the Internet, in which he poses with chefs in London. An Instagram user by the name, Being Chef Hassan, shared pictures with Shah Rukh Khan and captioned the post with an iconic dialogue from Om Shanti Om (2007). SRK wears a white t-shirt with a black jacket and dark sunglasses as he poses with two chefs at a London restaurant.

Last week, many fan pages shared pictures of the actor on the sets of Dunki, prepping for a shoot. Take a look at it below:

Dunki is one of the three major films that Shah Rukh Khan has signed. Being directed by Rajkumar Hirani, it will also star Taapsee Pannu in the lead. He had announced the project earlier this year and wrote: "Dear Rajkumar Hirani sir, Aap toh Mere Santa Claus nikle. Aap shuru karo main time pe pahunch jaunga. Actually main toh set par hi rehne lagunga. Feeling humbled and excited to finally work with you. Bringing to you all Dunki in cinemas on 22nd December 2023."

Besides this, SRK will feature in Siddharth Anand's Pathaan co-starring Deepika Padukone and John Abraham. The film will release in January 2023. Later, the actor will star in Atlee's Jawan with Nayanthara.