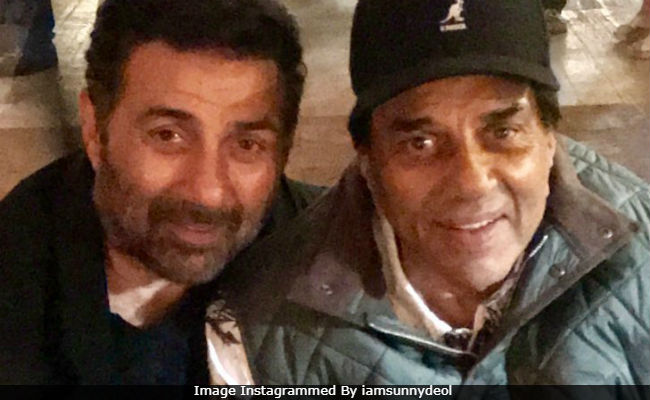 Actor Sunny Deol's recent picture with father Dharmendra has made the Internet very, very happy. "Papa and I," read Sunny Deol's caption for the picture, in which the father-son duo have been photographed sitting next to each other. "All-time favourite stars" and "Favourite Deols. Double power" are some of the several comments on their picture. A section of the Internet also requested Sunny Deol to star in an action film soon. "Sir, waiting for your big action movie. Please announce it soon," read a comment. Sunny Deol is veteran actor Dharmendra's elder son. His younger brother Bobby Deol is also an actor.

Last week, Sunny Deol treated us to a picture of himself with mother Prakash Kaur. "My mom, my world," he wrote.

My mom my world

Dharmendra oftens feature on Sunny and Bobby Deol's Instagram pages. Some months ago, Sunny Deol shared a still of Dharmendra from one of his films and before that, he posted an old photo of the 83-year-old actor with veteran actress Tanuja.

I just love this photo of Dad and Tanujaji It's a beautiful moment. Tanujaji is looking so happy. #beautifulmoment #beautiful #happy #happiness #enjoy

| NOT POSSIBLE TO REPLY YOU ALL. PLEASE, FEEL THE EMOTIONS OF YOUR DHARM . LOVE YOU , LOVE TO BE ALWAYS IN TOUCH WITH YOU ALL. pic.twitter.com/rhTHDWWyp3

Sunny Deol is currently busy with the Bollywood debut of his elder son Karan. He will make his debut with the film Pal Pal Dil Ke Paas. Bobby Deol has Housefull 4 in the pipeline.