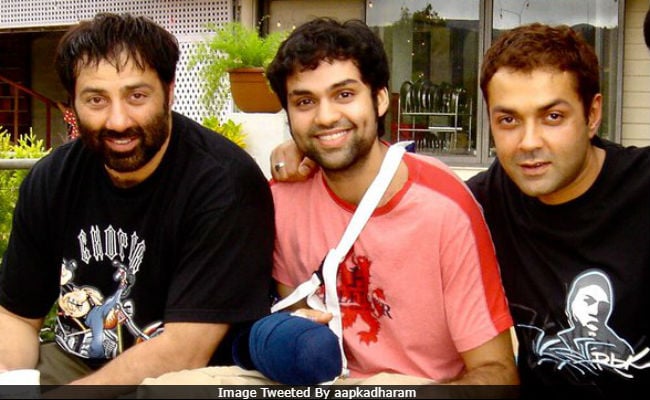 Veteran actor Dharmendra shared an old photo of his sons Sunny and Bobby Deol with nephew Abhay Deol to send his 'love' to all his fans and followers on Twitter. "Not possible to reply to you all. Love to be always in touch," read an excerpt from Dharmendra's Twitter post. In the throwback photo, the Deol brothers, dressed casually, are seated in what appears to be a cot, along with another family member or a close friend. Abhay is sandwiched between Sunny and Bobby Deol. He is seen wearing a cast. It looks like that the photo has been taken at a farmhouse years ago.

| NOT POSSIBLE TO REPLY YOU ALL. PLEASE, FEEL THE EMOTIONS OF YOUR DHARM . LOVE YOU , LOVE TO BE ALWAYS IN TOUCH WITH YOU ALL. pic.twitter.com/rhTHDWWyp3

Right now, Sunny Deol, last seen in Bhaiaji Superhit, is busy with the Bollywood debut of his elder son Karan. He will make his debut with the film Pal Pal Dil Ke Paas. Of Karan's debut, Dharmendra earlier said, "He has confidence and I want him to fly with his confidence. I wish he gets successful in his career and life."

Pal Pal Dil Ke Paas is directed by Sunny Deol and is co-produced by their production house Vijyeta films. The title of the film is inspired from Dharmendra's famous song of the same name from his film Blackmail.

Meanwhile, Bobby Deol has Housefull 4 in the pipeline while Abhay Deol's last film was Zero.