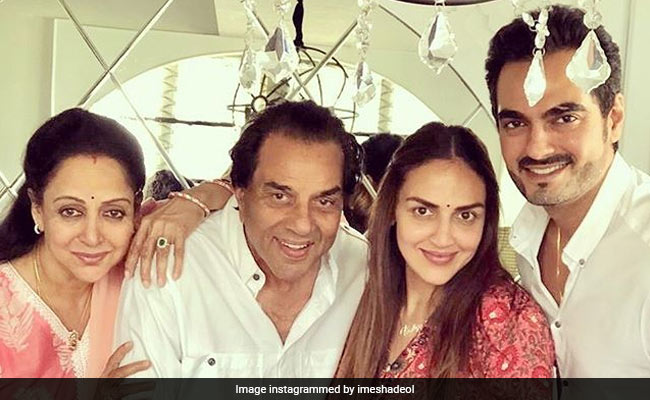 Veteran actor Dharmendra is celebrating his 83rd birthday today and heartfelt wishes from his wife Hema Malini and children Esha and Bobby Deol arrived on social media. Actress Hema Malini shared a set of pictures on Twitter and accompanied the post with a heartfelt message that read: "Happy Birthday to my everlasting love, the dearest father to my darling girls and proud grandfather to Darien and Radhya. I thank all the numerous fans who are sending their greetings to me on Dharamji's birthday & I will definitely convey their wishes to him." Esha Deol also shared a picture of herself with father Dharmendra, mother Hema Malini and husband Bharat Takhtani on her Instagram timeline. Esha Deol and her family is positioned right next to a cake, which appears to be for Dharmendra. "Happy birthday, papa," Esha Deol captioned the picture.

Happy Birthday to my everlasting love, the dearest father to my darling girls & proud grandfather to Darien & Radhya.
I thank all the numerous fans who are sending their greetings to me on Dharamji's birthday & I will definitely convey their wishes to himpic.twitter.com/hIbFDf2MQt

Dharmendra was born in Punjab in 1935 and popularly known for playing the rustic, rough and touch hero onscreen. Hismost iconic role is Veeru from the film Sholay, which also featured Hema Malini, Jaya Bachchan and Amitabh Bachchan. In 2012, he was awarded the Padma Bhushan, the third-highest civilian honour.

In a film career spanning over 50 years, Dharmendra has featured in over 100 films including LoaferYaadon Ki Baaraat and Chupke Chupke. Dharmendr was last seen Yamla Pagla Deewana: Phir Se, which also featured his sons Sunny and Bobby Deol.

Meanwhile, another Deol is gearing up for his Bollywood debut and it is none other than Dharmendra's grandson Karan. His debut fil has been titled Pal Pal Dil Ke Paas, after Dharmendra's popular track from the film Blackmail. Karan's father Sunny Deol is directing the film.