Charmme Kaur's fans thanked her for sharing this picture of Prabhas 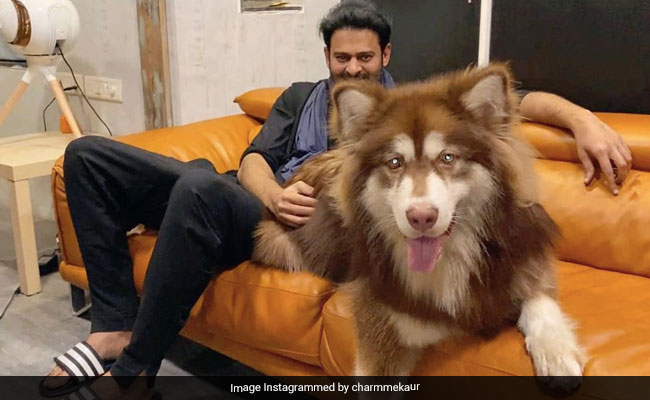 Seen actress-producer Charmme Kaur's latest Instagram post? It has sent the Internet into a tizzy. The post actually features a picture of superstar Prabhas posing with Charmme Kaur's 9-month-old "baby boy" on a couch. Yes, we are talking about her pet pooch - a huge Alaskan Malamute. Now you know why the photo has been going crazy viral on social media. In the picture, clicked at filmmaker Puri Jagannadh and Charmme Kaur's office Puri Connect, Prabhas looks dashing as always in a black outfit. His smile in the picture stole the hearts of his fans. Sharing the photo, Charmme Kaur wrote: "#Darling with my 9 months old baby boy." Within minutes, Charmme Kaur's post was flooded with comments such as "so adorable" and "thank you for this amazing picture."

Prabhas and Charmme Kaur have worked together in a couple of films. Some of them are 2006's Pournami and 2005's Chakram. Prabhas has also collaborated with Puri Jagannadh in the past. The duo worked on the 2009 film Ek Niranjan and on Bujjigadu, which released in 2008.

Prabhas is best-known for his performances in SS Rajamouli's popular two part epic-fantasy series Baahubali. Prabhas stepped into the Telugu film industry with the 2002 film Eeshwar. He has also featured in films such as Raghavendra, Varsham, Chhatrapati, Darling, Yogi, Munna and Ek Niranjan among many others. He was last seen in the high-octane action thriller Saaho, in which he co-starred with Shraddha Kapoor.

Prabhas will be next seen in Radhe Shyam. Directed by Radha Krishna Kumar, the film will see Pooja Hegde as the lead actress.