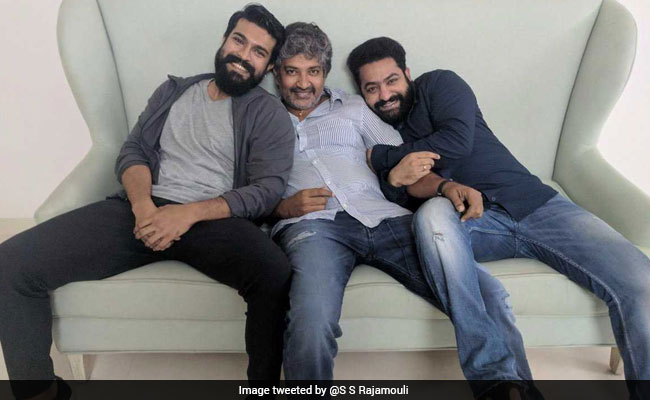 New Delhi: Baahubali's director S S Rajamouli and actors Junior NTR and Ram Charan Teja took a top spot on Sunday's trends list after the director shared a heartwarming picture with the two actors on Twitter. In no time, the picture went crazy viral on the Internet, in which the trio can be seen comfortably sitting on a couch while JR NTR is seen holding the director's arms. In the comments thread some Twitter users felt elated to see their favourite stars in one frame while the others assumed that S S Rajamouli is soon planning his next film with Jr NTR and Ram Charan.

Some Twitter users also felt entitled to give them suggestions like: "Please work in some picture together, waiting for SSR and NTR combo" while some users showered sweet comments such as "million dollar pic," "wow" and "mind blowing."

Take a look at the million dollar picture here:

Promoted
Listen to the latest songs, only on JioSaavn.com
S S Rajamouli has worked with the two actors in blockbuster hits. Ram Charan and S S Rajamouli worked together in Magadheerawhile Jr NTR and the director collaborated in Student No 1. S S Rajamouli's Baahubali 2: The Conclusion was the first Indian film to earn Rs 900 crore worldwide. The film also won several Nandi Awards which were announced recently.

Jr NTR was last seen in Jai Lava Kusa and has NTR 28 in the pipeline. He also hosted TV show Bigg Boss Telugu, this year while Ram Charan was seen in a special appearance in Khaidi No. 150's song and is currently filming Rangasthalam. After the untitled project with Danayya, S S Rajamouli has confirmed that he will work with superstar Mahesh Babu. The project is expected to go on floors in 2019.