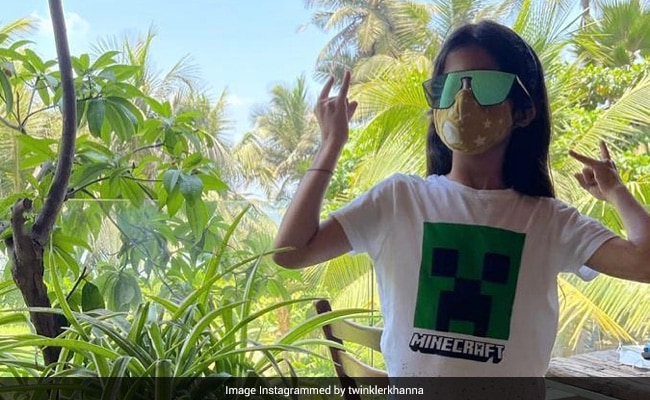 Our Tuesday turned better, thanks to Twinkle Khanna's latest Instagram upload. Twinkle's post is all about channelling our inner superheroes amid these tough times. No, it's not Twinkle, but the post features her cute daughter Nitara. Twinkle posted a picture of Nitara on the platform and praised her for adapting to the "new normal" of wearing masks during the pandemic. In the picture, Nitara, who is presumably a fan of Minecraft, the video game series, is sporting a white T-shirt that features its logo. The 8-year-old munchkin is also wearing a face mask and a pair of cool sunglasses as she poses for the picture on the balcony.

While Nitara as "masked superhero" is a treat to look at, Twinkle's caption also deserves your attention. In her caption, Twinkle called her daughter a "superhero" and her balcony a "forest". The actress-turned-author wrote, "The new normal: The balcony is becoming a forest and all our kids are turning into masked Superheroes! I marvel at how they have adapted to just slipping on a mask as they leave the door, the lack of fuss over their isolation."

Twinkle added, "They give us hope and joy and help us through our toughest times. And also behave like crackpots to make us laugh, like this little one right here. #littleheroes."

Tahira Kashyap, Sonali Bendre and Namrata Shirodkar reacted to her post. While both Tahira and Sonali dropped red heart emojis in the comment section, Namrata posted a few awestruck emojis.

Twinkle Khanna worked with Sonali Bendre in films such as Chal Mere Bhai and Love Ke Liye Kuch Bhi Karega. Twinkle and Namrata worked with each other in Jab Pyaar Kisise Hota Hai.

Twinkle Khanna frequently shares glimpses of her parenting diaries on her Instagram handle. Twinkle had posted another picture with Nitara in March this year. In the picture, the former actress can be seen cuddling with her daughter.

Sharing her motherhood experience, Twinkle wrote, "Our job is not to give our children perfect childhoods. It is to fill their heads with ideas, to honour their strengths and make them aware, but never underline their weaknesses. It involves loving them madly and throwing a few vegetables down their throats. We need to permanently dedicate a large number of our neurons towards their mosquito bites, bad grades and hurt feelings. And we must do all of this, day after day, without losing sight of everything we are and can be, along with being their mothers. #perfectlyimperfectparenting."

In case you missed them, take a look at some more pictures of Nitara on Twinkle's Instagram handle.

Meanwhile, Twinkle's husband and actor Akshay Kumar had tested positive for coronavirus in April this year. Akshay was hospitalised after contracting the virus. He came back home after being hospitalised for a week. Twinkle welcomed him home and shared the news with everyone on her Instagram handle. She wrote, "Safe and sound and good to have him back around. #allizwell."

In terms of work, Twinkle co-starred with Akshay in International Khiladi and Zulmi in the 90s. Twinkle is now a film producer and an author. She has written books such as Mrs Funnybones: She's Just Like You And A Lot Like Me, The Legend Of Lakshmi Prasad and Pyjamas Are Forgiving.