The author shared the image on her Instagram and tagged her son. 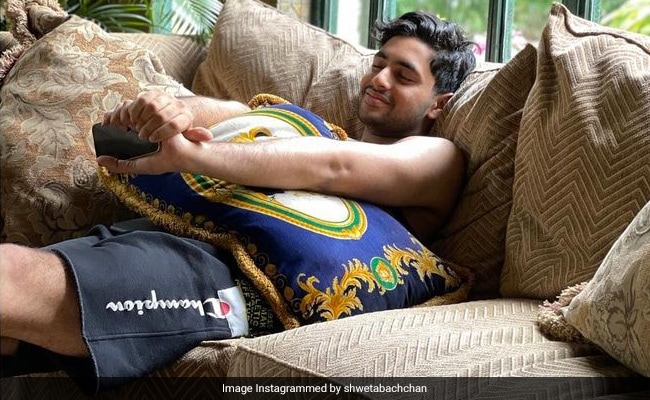 We all know that Shweta Bachchan Nanda has a way with words and her books and columns are proof. However, it looks like she also has a talent for photography. The author on Wednesday shared an image of her son Agastya Nanda chilling at home on a rainy day. The candid picture has Agastya relaxing on the couch with a pillow on his lap and a smile creeping on his face. Along with the image, the doting mother added a caption that told us how the family spent their lazy days at home. Shweta wrote, "On rainy afternoons, we do the couch potato," and don't miss the French fries emoticon that she added.

The snap was a huge hit with Shweta's fans, friends and family. Her elder daughter, Navya Naveli Nanda, was one of the first to leave a comment. Teasing her brother, she wrote, "Aggggllooooo," followed by a heart emoji. Actress Neetu Kapoor, too, left a comment with just heart emojis. Maheep Kapoor, who is married to actor Sanjay Kapoor wrote, "Aggie," with a heart emoji.

Of late, Shweta has been treating her fans to some lovely pictures on Instagram. One of the new images that have captured her fans' imagination is, in fact, a throwback photo from the time when she was a student at the Bombay Scottish School. Posting the greyscale picture, she wrote, “Where's Waldo? Class photo: Bombay Scottish School circa 1980's. (Hint- all the tall girls were made to sit on the floor)." We spotted Shweta on the floor, in the first row (the second kid from the right).

Several fans and friends of the author said that Shweta looks just like her daughter in the image. Navya, too, acknowledged the same and commented, "Hi, twin." Director Zoya Akhtar said, "You look like Navya here." Hinting at Shweta's love for cleanliness, filmmaker Farah Khan asked, "The germophobia started from here?"

Shweta Bachchan is the daughter of iconic actors Amitabh Bachchan and Jaya Bachchan. She married Nikhil Nanda, a Delhi-based businessman, in 1997. The couple has two children, Navya and Agastya. In addition to running a fashion label, Shweta Bachchan Nanda made her debut as an author with the book Paradise Towers in 2018.