Neha Dhupia and Angad's pictures will give you major couple goals 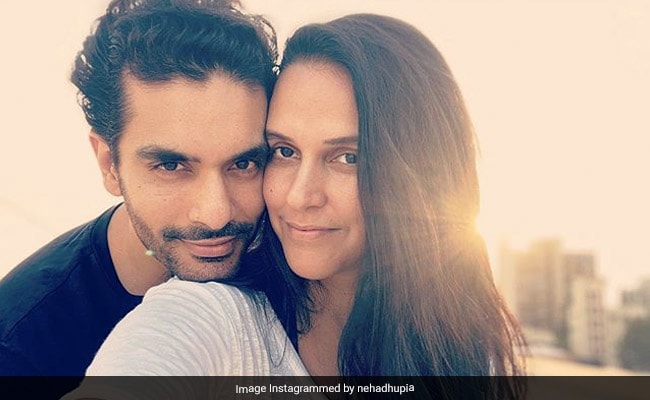 Neha Dhupia, on Wednesday, lit up Instagram by sharing adorable sun-kissed selfies, also featuring her husband Angad Bedi. The actress, in a selfie state of mind, clicked multiple pictures of herself and Angad on Wednesday morning and shared them with her fans one by one on social media. In the photos, the couple can be seen laughing and smiling with all their heart while taking selfies on what appears to be a terrace. Neha can be seen wearing a white t-shirt while Angad can be seen sporting a black t-shirt. From dolphin and owl to teddy bear and pigeon emojis, Neha captioned her posts with quirky emotions. Take a look:

Neha Dhupia and Angad Bedi got married in May, 2018. The couple are parents to a daughter named Mehr. Earlier, Neha shared an artwork made by their little daughter and wrote: "Colour of our heart ... green as it should be ... working towards saving our planet. Every day.... art this morning by our little one."

Colour of our heart ... green as it should be ... working towards saving our planet everyday .... art this morning by our little one @mehrdhupiabedi

Neha Dhupia was last seen in Priyanka Banerjee's short film Devi, in which she co-starred with Kajol, Shruti Haasan, Neena Kulkarni and Shivani Raghuvanshi. The actress, known for her performances in films such as Singh Is Kinng, Tumhari Sulu, Hindi Medium and Lust Stories, also features as one of the gang leaders on MTV's reality show Roadies: Revolution.

Angad Bedi, on the other hand, will next be seen in Gunjan Saxena: The Kargil Girl, in which he will star alongside Janhvi Kapoor. He was last seen in web-series The Verdict - State Vs Nanavati. Before that, he featured in Abhishek Sharma's The Zoya Factor, co-starring Sonam Kapoor and Dulquer Salmaan.