The Internet Loves This Pic Of Neha Dhupia And Daughter Mehr 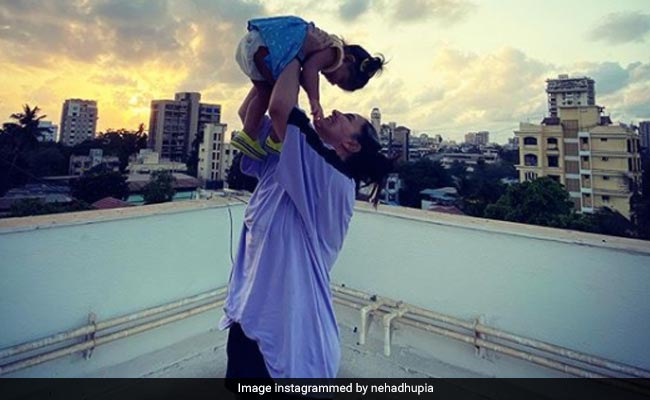 Bollywood actress Neha Dhupia shared a page from her motherhood diaries on her Instagram profile on Monday morning and the Internet loved it. The actress posted an adorable picture of herself along with her daughter Mehr. The photograph captured the beautiful moment between Neha and Mehr with the Mumbai skyline in the backdrop. The comments section had a plethora of compliments. Neha's father Pradip Dhupia wrote on the comments section: "Heaven on earth. Love you my babies." Another comment read, "Fly baby girl, fly high." Many Instagram users dropped heart emojis in the comments section.

Neha Dhupia and Angad Bedi got married at a private ceremony in New Delhi in 2018. The couple welcomed their daughter Mehr in the same year. We simply love it when Mehr features on her parents' Instagram profiles. Check out some of the posts here:

Neha Dhupia was last seen in the short film Devi, alongside Kajol and Shruti Haasan. She also featured as one of the gang leaders in Roadies Revolution. Neha, a former beauty queen, is best-known for her performances in films such as Singh Is Kinng, Hindi Medium, Tumhari Sulu and Lust Stories among many others.

Meanwhile, Neha's husband Angad Bedi was last seen in the 2019 movie The Zoya Factor, where he shared screen space with Sonam Kapoor and Dulquer Salmaan. The actor will be next seen in the biopic Gunjan Saxena: The Kargil Girl which stars Janhvi Kapoor in the titular role.