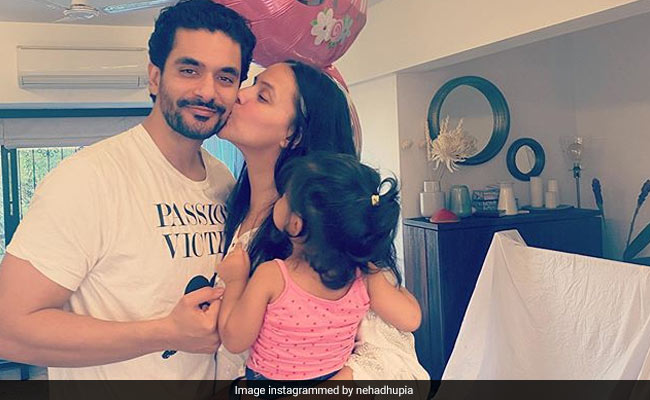 Neha Dhupia just made our Monday better. The 39-year-old actress shared a set of adorable pictures featuring her wedding anniversary and mother's day celebrations at home with husband Angad Bedi and daughter Mehr and it is winning our hearts. In the pictures, Neha can be seen carrying baby Mehr as she poses with Angad Bedi. They can be seen celebrating by cutting a cake together. Sharing the set of pictures, Neha wrote, "Lockdown celebrations. Mother's day and wedding anniversary." She also added the hashtag "family" to her post. Take a look:

Within minutes of posting, Neha's family pictures were flooded with comments from her friends and fans. Reacting to the pictures, Shweta Bachchan wrote, "Happy anniversary guys," to which Neha replied saying, "thank you Schweppes." Huma Qureshi dropped black heart emojis on her post while Sophie Choudry also commented with red heart emoticons.

Neha Dhupia seems to be in a mood of celebrations. On Monday, the actress shared a set of loved-up pictures with Angad Bedi and wrote an adorable anniversary post. Referring to the controversy due to her "it's her choice" remark in MTV's reality show Roadies auditions, she wrote, "Happy anniversary my love ... to two years of togetherness... "Angad is like 1. The love of my life, 2. a support system, 3. a great father, 4. My best friend and 5. The most annoying roommate ever. It's like I have 5 boyfriends in one...it's my choice."

Happy anniversary my love ... to two years of togetherness ... "Angad is like 1. The love of my life , 2. a suport system, 3. a great father, 4. My best friend and 5. The most annoying roommate ever. It's like I have 5 bfs in one...it's my choice." #thosewhoknowknow #nehaangad @thememoryalbum_

On the work front, Neha was last seen in Priyanka Banerjee's short film Devi where she shared screen space with Kajol, Shruti Haasan and Neena Kulkarni. On the other hand, Angad was last seen in The Zoya Factor where he shared screen space with Dulquer Salmaan and Sonam Kapoor. He will next be seen in Gunjan Saxena: The Kargil Girl co-starring Janhvi Kapoor.