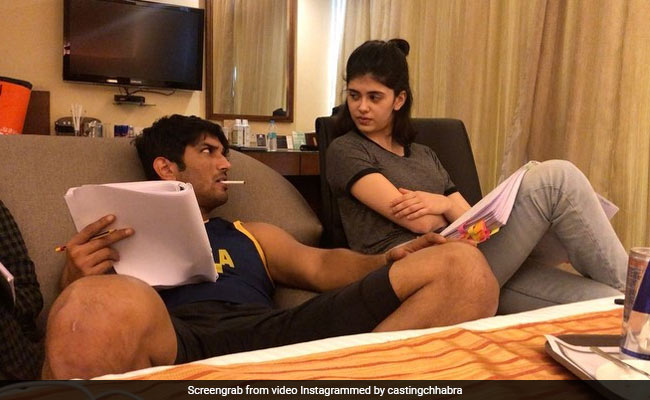 A still from the video shared by Mukesh Chhabra. (courtesy: castingchhabra)

Dil Bechara director Mukesh Chhabra shared a BTS memory from the reading workshop of the film. The video features the film's lead actors Sushant Singh Rajput and Sanjana Sanghi along with Swastika Mukherjee (who starred as Kizie Basu's mother) and Saswata Chatterjee (who played Kizie's father). In the video, Sushant and Sanjana can be seen rehearsing the scene from the film, where Kizie schools Manny for smoking. Sharing the video on Instagram, Mukesh Chhabra wrote: "Reading workshop #BTS." Later, Swastika Mukherjee posted the video on her profile and she wrote: "Looking at this throwback with mixed feelings."

Dil Bechara is inspired by John Green's book The Fault In Our Stars, which was also adapted into Hollywood film with the same name and it featured Shailene Woodley and Ansel Elgort in the lead roles. The film also featured Saif Ali Khan in a cameo appearance. Dil Bechara went on floors in 2018 and it was earlier scheduled to release in May this year. However, its release was postponed due the coronavirus pandemic. The film is streaming on Disney+Hotstar and is available to subscribers as well as non-subscribers.

Dil Bechara opened to largely positive reviews. Film critic Saibal Chatterjee, in his review for NDTV, gave the film 3 stars out of 5 and he wrote: "One cannot help falling in love with Sushant Singh Rajput and debutante Sanjana Sanghi. They strike up a lively rapport. The more sparkling passages, infused with humour and warmth, owe their existence to the source material."

Sushant Singh Rajput died on June 14. The actor became a household name after starring in the daily show Pavitra Rishta. His career trajectory included hits as well critically acclaimed films like MS Dhoni: The Untold Story, Kedarnath, Chhichhore and Sonchiriya among others.