Read inOther Languages
This Article is From Jan 24, 2019 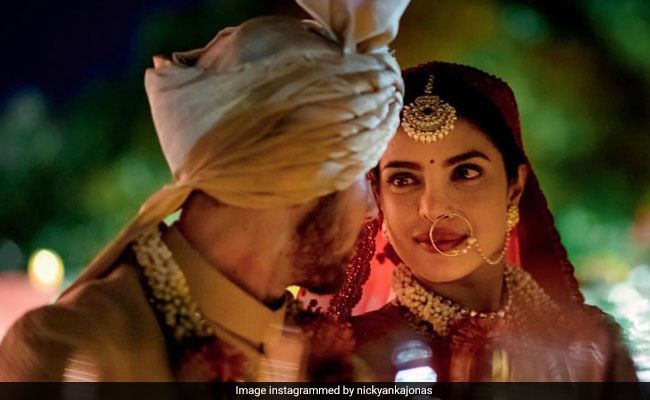 Some more photos from Priyanka Chopra and Nick Jonas' Jodhpur wedding hit the Internet on Thursday. Fan clubs have curated the pictures from the wedding which were initially shared by Priyanka's family friend Sudeep Dutt on his Instagram timeline. One of the photos featuring Priyanka and Nick was shared by Mr Dutt with the caption that read: "Chashm-e-Baddoor." The photo is from the couple's Hindu wedding ceremony. The candid shot features Priyanka adorably looking at Nick. The picture also offers a close-up of the actress' bridal look. Another picture shared by the fan clubs is from the couple's Christian wedding, which features Nick's brother Joe Jonas with Priyanka's close friend Tamanna dressed as the bridesmaid.

Earlier, VJ Anusha Dandekar, who is a very close friend of Priyanka Chopra, had shared photos from her Christian wedding on her Instagram timeline. The picture features the newlyweds Priyanka and Nick standing next to Anusha and her boyfriend Karan Kundra. "Once upon a time, there was a real life, beautiful fairy tale," Anusha captioned the picture.

Once upon a time... there was a real life, beautiful fairy tale...

Over the week, Parineeti Chopra had shared several photos from Priyanka and Nick's sangeet and haldi ceremonies. The picture from the sangeet ceremony features Priyanka with her bridesmaids Parineeti, Tamanna Dutt and others.