The One Where Jennifer Aniston's F.R.I.E.N.D.S Co-Stars Interrupt Her Interview, One By One. Circa 1994 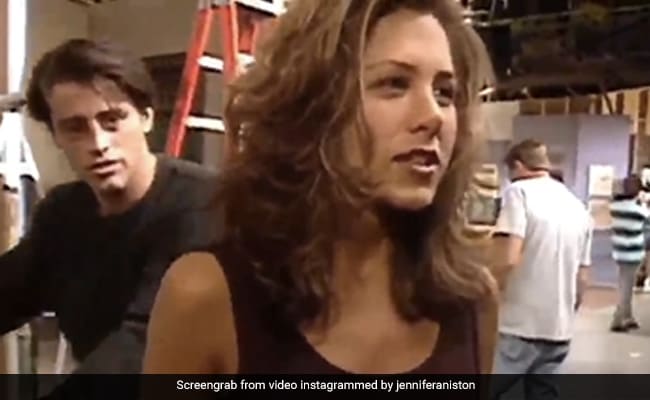 After F.R.I.E.N.D.S: The Reunion started streaming, our favourite Jennifer Aniston, who played Rachael Green in the iconic sitcom, made a trip down memory lane and shared a video from way, way back, like really. The video, which is from the Entertainment Tonight archives, features Jennifer Aniston's co-stars - Lisa Kudrow, David Schwimmer, Matthew Perry, Matt LeBlanc and Courteney Cox - hilariously interrupting her interview on the sets of F.R.I.E.N.D.S in 1994, the year when it all started. Yes, the first season of F.R.I.E.N.D.S premiered on NBC on September 22 in 1994. In the clip shared by Aniston, she can be seen giving an interview about working with David Schwimmer, Courteney Cox, Lisa Kudrow, Matthew Perry and Matt LeBlanc in the show but she can be seen bursting into laughter every now and then as her co-stars make repeated interruptions.

The 10 seasons of F.R.I.E.N.D.S, created by David Crane and Marta Kauffman, aired from 1994 to 2004. It revolves around the lives of 6 friends who live in Manhattan, New York and it also starred James Michael Tyler, Mitchell Whitfield, Maggie Wheeler, Jane Sibbett, Elliott Gould, Christina Pickles and many others as recurring cast.

On Thursday, Courteney Cox remembered her F.R.I.E.N.D.S days with this Instagram trend:

Meanwhile, here's a glimpse of the F.R.I.E.N.D.S Reunion: