F.R.I.E.N.D.S Reunion - "Could He Be Wearing Anymore Clothes?": The Internet Can't Get Enough Of Joey (Matt LeBlanc) Being Joey

Remember the episode 'The One Where No One's Ready' from Season 3, in which Joey shows up wearing all the clothes of Chandler? 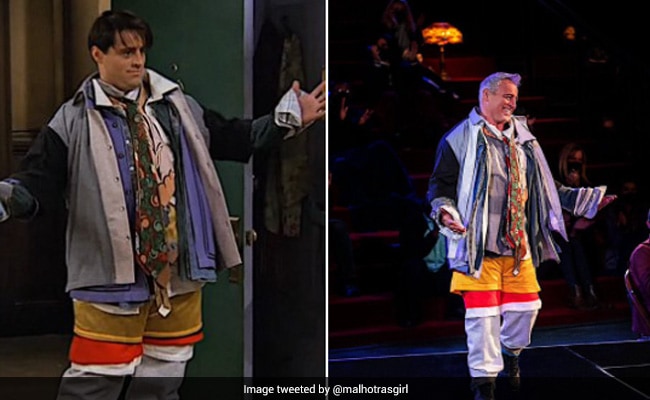 Oh, to see Matt LeBlanc recreating the iconic, as well as the ROFL Joey Tribbiani scene in F.R.I.E.N.D.S Reunion was something we all were waiting for. And the actor fulfilled our wishes. We are talking about Matt LeBlanc, sorry, Joey being Joey on the sets of F.R.I.E.N.D.S Reunion by lunging his way onto the ramp walk wearing all of Chandler Bing's clothes. Remember the episode 'The One Where No One's Ready' from Season 3, in which Joey shows up wearing all the clothes of his buddy and roommate Chandler (Matthew Perry) because he was mad at him? Well, Joey pulled off the same stunt during The Reunion, because some things never change. And that's not it. After making a dramatic entry, Matt LeBlanc said: "Could I be wearing anymore clothes?" That was the moment when the audience and the Internet went crazy.

Needless to say, Twitter can't get enough of Matt LeBlanc making the iconic Joey scene alive again. "Could he be wearing anymore clothes?" tweeted a fan while another wrote: "Don't tell me you weren't waiting for this part."

Check out some of the fan tweets about Joey showing up in Chandler Bing's clothes, again:

COULD HE BE WEARING ANYMORE CLOTHES? #FRIENDSREUNIONpic.twitter.com/4qRdhl9VAt

"Look at me! I'm Chandler! Could I be wearing anymore clothes?!"#FriendsReunionpic.twitter.com/I24R73JXZv

" COULD I BE WEARING ANYMORE CLOTHES "

During the reunion, Matt LeBlanc also revealed that he dislocated his shoulder after catapulting himself into an armchair while filming the same episode 'The One Where No One's Ready.' He said: "I went just to jump over the coffee table and somehow tripped and my legs went up in the air and my shoulder came out of the socket." Now we know why Joy Tribbiani appeared in a sling in the next episode.

F.R.I.E.N.D.S Forever: 10 Things We Learnt, From What Chandler Does(nt) To Janice’s Laugh