Courteney Cox Still Has Monica's Cooking Mojo. The Proof Is This Chicken Curry

"Could you be anymore Monica," asked a fan on Instagram 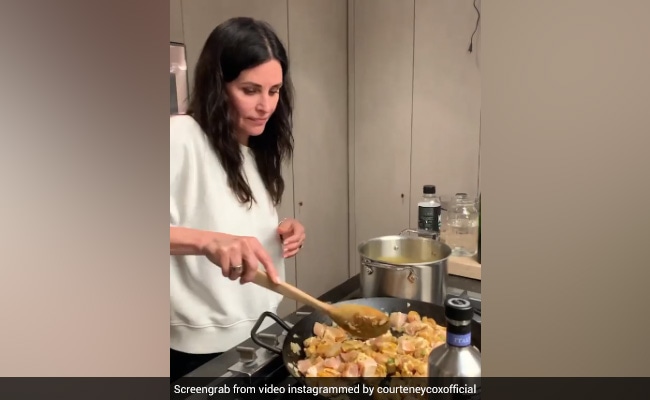 It isn't Thanksgiving or Christmas but Courteney Cox aka Monica Geller's culinary hangover is still intact. Well, the reason we brought this up today is partly because it is F.R.I.E.N.D.S Reunion day and also because she posted a video of herself cooking some chicken curry recently. She captioned the video, "Chicken Curry... You ready for this one?" Turns out, Courteney's Instafam too thinks she is a total Monica, who played the role of a chef in the popular sitcom F.R.I.E.N.D.S. "Could you be anymore Monica," a caption read. Another fan added, "Monica doing her thing." More comments like "Thanks for keeping Monica inside you," and "Monicaaaaa, is that you?" kept popping up on her post. Well, seems like some things never change. Not even after 17 long years.

Courteney Cox loves to share videos from her kitchen diaries and her fans seem to be loving them too. Check out some of the videos here. We bet it's nothing like Rachel Green's weird mix-up of trifle and Shepherd's pie, which according to Monica's brother Ross "tasted like feet."(the fans will get the reference). Check out the videos here:

Courteney Cox's character Monica Geller in F.R.I.E.N.D.S was the mama hen of the group, which included 5 others - Lisa Kudrow as the goofy albeit endearing Phoebe Buffay, Jennifer Aniston as the sassy fashionista Rachel Green, David Schwimmer as a nerd named Ross Geller, Matthew Perry as the ever charming Chandler Bing (we still have a tough time recalling what he did for a living) and always hungry actor Joe Tribiani, played by Matt LeBlanc.