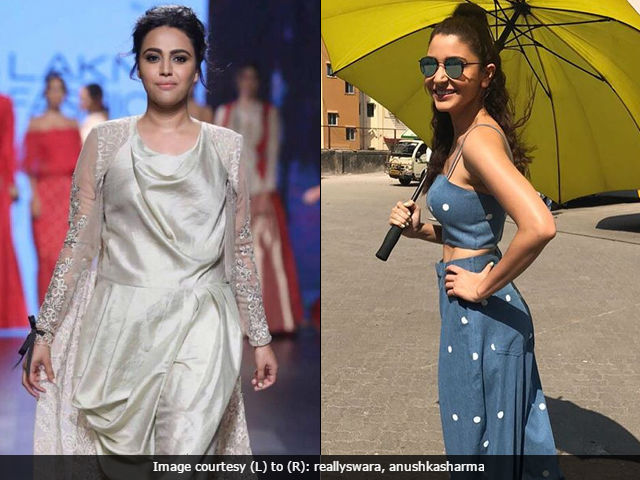 New Delhi: A day after Aamir Khan said helping those you care about is a 'normal human tendency,' actresses Anushka Sharma and Swara Bhaskar have weighed in on the debate over nepotism. Anushka Sharma, who made her Bollywood debut with Yash Raj Films' Rab Ne Bana Di Jodi opposite Shah Rukh Khan, told news agency PTI: "They did have an option to take any industry kid at that time but Aditya Chopra put faith in me. I can talk about my experience and I've never faced nepotism in any way. Whether this happens or not, everybody has their own experiences. May be it happens but I can never say this about Aditya. He has launched all the outsiders. Me, Ranveer Singh, Parineeti Chopra. Except for Arjun (Kapoor), all the Yash Raj talent are outsiders."

Swara Bhaskar, who featured with Kangana Ranaut in Tanu Weds Manu and its sequel, told PTI: "Bollywood as an industry is based on relationships, it has always been star-driven and it has an element of feudalism. So, it would be difficult for an outsider but my experience of Bollywood is not nepotistic at all."

Kangana is the originator of the debate over nepotism. Weeks ago on TV show Koffee With Karan, she called host Karan Johar 'intolerant' towards outsiders and a 'flag-bearer of nepotism.' Swara told PTI: "I think people, who have been most warm and nice are people like Karan Johar, Sonam Kapoor and even Aditya Chopra. He has always been very responsive and helpful."

She was particularly effusive about Mr Johar. "Since the whole nepotism debate is going on, I just want to say that Karan has been a revelation to me. He is an industry elite but he has been a wonderful surprise. He launched our film's poster despite me not knowing him personally," Swara told PTI.

Karan Johar responded to Kangana later at an event in London, saying he was "done with Kangana playing the woman and victim card."

Swara Bhaskar is awaiting the release of her upcoming film Anaarkali of Aarah, which Karan Johar has helped publicise. She told PTI: "His tweet added a certain credibility and gave visibility to our film. He is a very busy man but he replied to all my messages. When he tweeted our poster, people thought I had paid him. All I want to say is, I can't afford to pay him."

Swara, 28, also told PTI: "People should have the freedom to cast whoever they want to cast. If filmmaker Avinash Das wants to cast me, then he should not have the pressure to cast Alia Bhatt or Shraddha Kapoor. Similarly, if Karan Johar wants to cast Alia or Shraddha, he should have the freedom to do that. He should not be judged for that. Sometimes that much openness is needed."

On the work front, Anushka Sharma's film Phillauri is scheduled for release on March 24. The Band Bajaa Baraat actress is also shooting for Imtiaz Ali's next venture along with Shah Rukh Khan.