Jolly LLB 2: The Deleted Scene That Is Akshay Kumar's Favourite 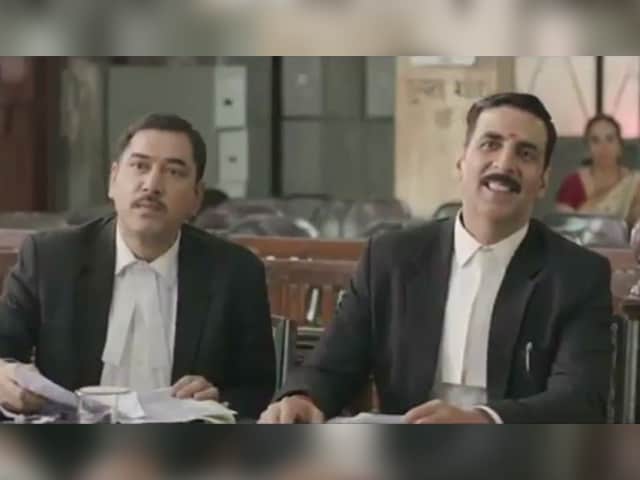 Akshay Kumar in a still from the Jolly LLB 2 deleted scene (courtesy: akshaykumar)

New Delhi: Actor Akshay Kumar's Jolly LLB 2 is the gift that keeps giving. On Monday, the 49-year-old star tweeted to thank fans for their 'love' - Jolly LLB 2has made over Rs 95 crore after its second weekend on screens - and attached a deleted scene from the film that he said is one of his favourites. As the lawyer Jolly, Akshay features only briefly in the scene, which shows Justice Sunderlal Tripathi, played by actor Saurabh Shukla, and his staff munching on lunch in their court room. "Us judges are worse off than the labour class," he tells Jolly, at which point walks in lawyer Pramod Mathur, played by actor Annu Kapoor.

The scene, as tweeted by Akshay Kumar:

Thank you so much for giving so much love to #JollyLLB2 Sharing with you'll one of my favourite deleted scene, have a Jolly good morning pic.twitter.com/wOOOXW0egL

Four scenes from the film were deleted on order of the Bombay High Court but this is not apparently one of them.

Promoted
Listen to the latest songs, only on JioSaavn.com
Jolly LLB 2, co-starring Huma Qureshi and Sayani Gupta, released on February 10 and has made Rs 95.44 crore in 10 days, as reported by trade analyst Taran Adarsh. The film is expected to collect 100 crore this week. Jolly LLB 2 is a sequel to the 2013 sleeper hit starring Arshad Warsi as maverick lawyer Jagdish or Jolly. Saurabh Shukla is the only actor from the previous film to return.

Akshay Kumar now has two more films to look forward to this year - Toilet: Ek Prem Katha with Bhumi Pednekar and 2.0, in which he plays the villain opposite Rajinikanth, no less.