Neha Dhupia is holidaying in Maldives with her family 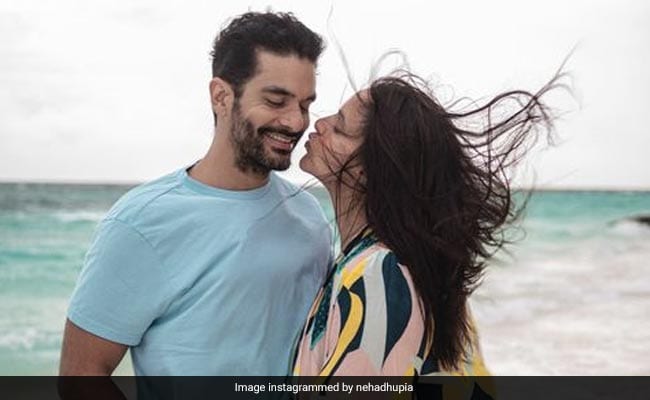 Neha Dhupia and Angad Bedi, who checked into the island nation of Maldives a couple of days ago, have actively been sharing photos and videos from their getaway. On Wednesday morning, Neha Dhupia posted a couple of mushy pictures from the Maldives. She captioned the post: "Flying kiss" and added the hashtag #islandversion. In the pictures, Neha Dhupia and Angad Bedi can be seen chilling on the beach. For her day out in the sun, Neha Dhupia picked a printed kaftan, while Angad complemented her in a teal t-shirt.

Angad Bedi shared a video of him and Neha Dhupia cycling in the Maldives and he added Jennifer Lopez's song Marry Me to the video. Tagging Jlo, he captioned the post: "With my jhe..lo."

Neha Dhupia, on the other hand, posted a video of her and Angad Bedi dancing with kids Mehr and Gurik and she wrote: "May we wake up to mornings like these everyday... #happytwosday #twosday."

A few days ago, Neha Dhupia posted picture of herself chilling in the pool and she captioned her post: "Feeling fly like a flamingo."

Angad Bedi, tried to sum up "Expectation vs reality" through this Instagram post, all the way from Maldives.

Neha Dhupia married Angad Bedi at a private ceremony in New Delhi in 2018. The couple welcomed their daughter Mehr in the same year. The couple also welcomed a baby boy last year and they have named him Guriq.