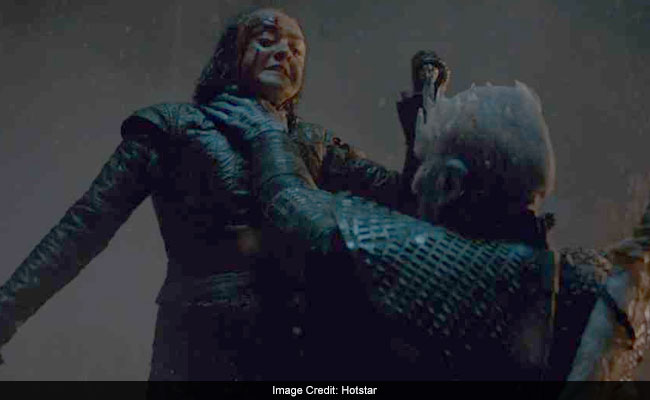 A still from Game Of Thrones 8 episode The Long Night. (Image credit: Hotstar)

It has been almost a month since Game Of Thrones aired its final episode but it seems fans are still gripped by the show's fever. Recently, a social media user pointed out a scene in the Indian TV show Aladdin - Naam Toh Suna Hoga, which resembled a sequence in David Benioff and DB Weiss' international show Game of Thrones.

The third episode of the finale season of Game Of Thrones saw Arya Stark jumping out of the darkness and killing the Night King with the dagger. The scene was hailed by some, while some fans criticised the sequence and created a pool of memes on social media.

One user on the website Reddit shared a video from an episode of Aladdin - Naam Toh Suna Hoga, and drew a parallel.

In the video, a skeleton is jumping at the lead actor and trying to attack him but the hero saves himself by grabbing the skeleton by its bones and stabbing it with a weapon. It is reminiscent of the killing scene of the Night King in Game of Thrones.

The video, which is now doing the rounds on the Internet, has left netizens in splits, with many saying that Indian makers have copied a scene from the Game of Throneswhile a section of social media users felt that the scene from Aladdin - Naam Toh Suna Hoga may have inspired the makers of the international show.

(Except for the headline, this story has not been edited by NDTV staff and is published from a syndicated feed.)
Comments
game of thronesarya night king