Is humanity, as portrayed on the show, really worth saving? 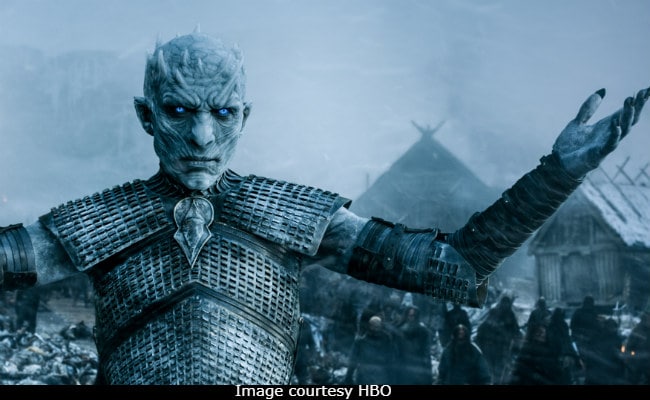 Perhaps it's time to give this dude a chance. (Courtesy HBO)

This is a defense of the Night King. This is an article explaining why the Night King not only should win the Iron Throne, but also why he may be morally superior to everyone in Game Of Thrones,, including your beloved Jon "I brood in the corner at parties" Snow.

Defending the Night King isn't easy. The central conceit of this entire show is that the Frank Sinatra doppelganger - can we call him Even Ol'(er) Blue Eyes? - is the "bad guy" simply because he wants to destroy all of humanity and turn them into murderous ice zombies. And, yes, those totally seem like the traits of a "bad guy." But before we lump him in with the likes of Hans Gruber, Hannibal Lecter and Wes Mantooth, it's important to ask two questions - because maybe we have him pegged all wrong.

- Do you get angry when a tiger eats an antelope?

The idea that one can (or should) be true to one's nature, be it man or beast, is nothing new; it's just the language that has changed over the years. From Polonius telling Hamlet, "To thine own self be true" to people on Twitter saying things like, "Tigers gonna tiger," one thing is clear: Nature is not evil; it's just nature.

Which raises the question: Is the Night King following his own primordial nature, or does he have some sense of morality, or at least ethics?

For those who don't remember, the Night King was once just another dude. Specifically, he was a First Man, which refers to the first humans to step foot on Westeros. They were objectively not good dudes. They slaughtered the Children of the Forest, who were native to the land, in a hungry real estate grab - so the Children of the Forest fought back. They created the Night King by stabbing a captive First Man with dragonglass in hopes of creating a weapon to fight the other First Men.

That's right: the Night King was created as a weapon. Not a person wielding a weapon but as a weapon himself. The inherent implication is that he is not a human but a tool. That tool is running on basic instinct, which might make him dangerous and destructive, but it doesn't necessarily make him evil.

And it doesn't make him human. Yes, the Night King is clearly intelligent. So were velociraptors but no one got mad at them in Jurassic Park, just at the people who created them. And let's be honest, if he still had a sense of humanity, wouldn't he have at least once by now said, "Bring out yer dead! Bring out yer dead!" in a British accent while reanimating corpses?

Of course, the Night King could have remained north of the wall and lived his days out there. He could have not burned a kid alive in the season premiere (we all have our flaws, right?). He could have left everyone alone, tossed back a few cold ones and become a baseball fan or something. At least, we think he could have. The problem is that we don't actually know. Perhaps he is like that tiger, only instead of killing to eat, he must kill to procreate. All we know is what people have theorized and what Bran told us last episode.

Maybe he can't help himself from marching south, the way salmon swim up stream to lay eggs. Maybe he's doing it for revenge. Maybe he thinks his way of life is a better way of life (which, to be fair to him, is what everyone on the show thinks).

- Is humanity really worth saving? (In the show, y'all. Calm down.)

In Sunday's episode, Bran Stark/Thee-Eyed-Raven/goth Macaulay Culkin said that the Night King wants to kill him to erase the memory of all humanity. Which, again, was sort of why the Night King was created in the first place. Our knee-jerk reaction is to think that's a bad thing, because humanity needs to be preserved. And we think this because we are human. (Apologies to any canine readers.)

While that's certainly true in our real world, is it true in Westeros? We've watched for seven seasons as humans killed each other in the battle to win a metal throne and told other humans how to live - and mostly through evil means. Seriously, I could list all the bad things people on this show have done, but I've typed the words "incest," "secret children," "murder," "betrayal," "rape," "massacre," "lie," "cheat," "steal" and "castrate" way too many times in the past month.

Were the Night King to take over Westeros, the Iron Throne would basically be rendered useless. For all of Daenerys's talk of breaking the wheel, it sure seems like she's going to be just another vengeful ruler, run by bloodlust.<

Humans have controlled Westeros for millennia, and things are more depressing than an Insane Clown Posse concert. Perhaps it's time to give someone else a chance. Someone who, for the record, rules over a bunch of (undead) people who seem to have absolutely no problem with one another. Maybe, just maybe, humanity doesn't deserve Westeros, a continent they violently stole in the first place.