Game Of Thrones 8, Episode 3: What To Expect, From The Dragons To The Night King 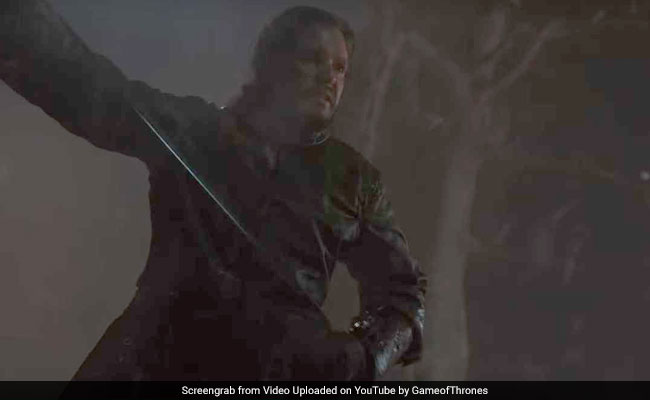 A still from Game Of Thrones 8. (Image courtesy: YouTube)

The second episode of Game Of Thrones, which aired in India on Monday morning (on Hotstar), left the dwellers of Winterfell at the brink of the Great War. The Army of the Dead have arrived and the war counsel is ready (or are they?) with a plan. Bran Stark, who is now the three-eyed raven, declares ominously that the Night King, the leader of the undead, wants to wipe off all human civilisation along with the memory of it - the latter Bran says is him. Jon Snow knows that the killing the Night King is the only way to win the war but he also knows that he won't expose himself so early in the war. Bran suggests that he'll lure the Night King to the godswood.

As they make the battle plans, the army of dead arrive at Winterfell. From the teaser of the third episode, which will be out next week, we gather that the Great War will be in full swing. Here are three takeaways from the promo of Game Of Thrones 8, episode 3:

"The Night King Is Coming"

In the backdrop of fire-engulfed Winterfell, Jon Snow voiceovers, "the Night King is coming." It appears that Bran's plan hit the bull's eye and in an attempt to kill the three-eyed raven, the Night King indeed exposed himself. In another visual, Jon Snow unsheathes Longclaw, his sword which is made of Valyrian steel, one of the known substances which can kill the undead, including the Night King.

Jon Snow reveals his true identity - Aegon Targaryen - to Daenerys just before the arrival of the army of the dead. She suspects Jon Snow as the only two people, who can 'verify the truth of Jon's parentage, are his brother (Bran) and his best-friend (Samwell Tarly).' Daenerys knows that if proved Jon will be considered the true heir to the Iron Throne.

In one of the visual, Daenerys scathingly tells Jon, "the dead are already here,' which could mean that though she may not accept Jon's claim to the throne, she understands the bigger threat at hand was the undead knocking at Winterfell.

Glimpse of a dragon - Drogon or Viserion?

A split second glimpse of a dragon, that's all the showrunners offered in the promo. The dragon could be either Drogon (with Daenerys riding it) or Viserion, the dragon resurrected by the Night King, who also rides it.

The war counsel thinks that Dragons may give them an edge over the White Walkers but Bran, the omniscient, is unsure and says, "No one's ever tried."

The role of the dragons in the Great War will be crucial. Also, the survival of Drogon and Rhaegal after the war is important as Daenerys' journey to the Iron Throne will begin after the Great War.