SPOILER ALERT! The Great War is over and the good side won. Now, read the details 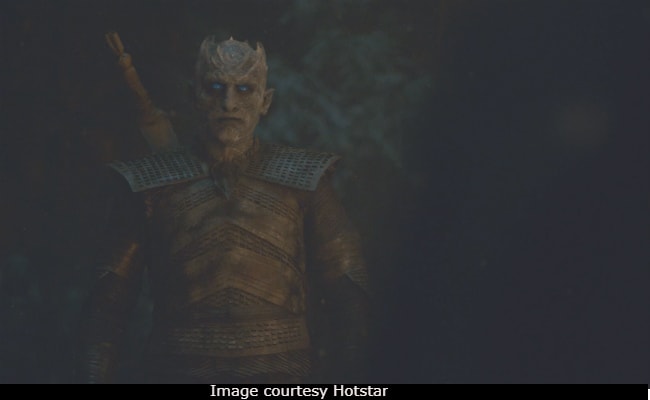 A still from Game Of Thrones 8. (Image courtesy: Hotstar)

The great war begins. The Dothraki, the Unsullied, Ser Jorah, Ser Brienne, Jaime Lannister, and Daenerys Targaryen and Jon Snow on the dragons battle up front with the Army of the Dead. Melisandre, also known as the Red Woman, arrives moments before the battle and gives the 'gift of fire' to the Dothraki tribe, who are the first to charge. However, their luminous swords are put out within seconds. After a fierce attempt, all armies fall back to Winterfell, while Daenerys and Jon Snow circle around Godswoods (where Bran Stark, the three-eyed raven, is stationed) to look out for the Night King.

Daenerys and Jon Snow come face-to-face with the Night King and the resurrected dragon Viserion. They're stunned to see Viserion's power, which is much more than that of Drogon and Rhaegal. Brothers fight a now resurrected brother; however, Viserion is defeated by Rhaegal and the Night King falls off. Daenerys, atop Drogon, takes her chance and casts dragon fire on the Night King, who walked unscathed.

Jon Snow spots the Night King walking toward Godswood and charges towards him with his Valyrian steel sword, however, the Night King resurrects the dead surrounding him - the Dothrakis, the free men and the unsullied - and escapes. Daenerys comes to Jon's rescue but she falls of Drogon when Drogon attempts to free himself from the clutches of the White Walkers. Ser Jorah comes to Daenerys's rescue but dies defending his queen. In an emotionally stirring scene, as Daenerys mourns Ser Jorah's loss, Drogon too weeps by her side.

In a parallel segment, the Army of the Dead breaches the wall of Winterfell and all attempts to light up the trenches go in vain due to an unprecedented snowstorm. Again, Melisandre comes to their rescue by starting a fire through her spell, which momentarily contains the White Walkers outside Winterfell. After a while, the Army of the Dead, figures out a way to breach the lit trenches. Everyone prepares to man the wall as the White Walkers try to crawl their way inside. Arya Stark joins the battle and she wields her weapon (recently made by Gendry) with valour and chutzpah. In a moment of absolute bravery, Lady Mormont kills a giant White Walker.

When the Night King awakens dead on the battlefield, the dead inside Winterfell are also reanimated - including Lady Mormont. They infiltrate the crypts. Sansa and Tyrion take refuge behind a tombstone and there they share a touching moment - remember Tyrion was the best thing that happened to Sansa in King's Landing?

Arya slips into Winterfell library and combats the White Walkers, who have infiltrated the walls of her home. The Hound and his men save Arya Stark, who is corned by the White Walkers. In the attempt to rescue Arya, Beric Dondarrion is fatally injured. Melisandre meets Arya once again. Arya says, "You said that I'd shut many eyes forever and you were right about that." Melisandre replies, "Brown eyes, green eyes... and blue eyes."

In Godswood, Theon Greyjoy thanks his men while Bran Stark wargs into raven and witnesses the Night King atop the resurrected dragon. Finally, the battle reaches Godswood where Theon and the Iron Born fight valiantly. Soon, Theon finds himself surrounded by the dead, looking into the eyes of the Night King, who has come for Bran.

Bran tells Theon that he is a good man as he charges towards the Night King, who kills him in an instant. Just when everyone thought the day of the living is over, ARYA STARK pounces on the Night King, kills hims with her dragonglass weapon and brings the Great War to the end.

As the Night King disintegrates, so does the Army of the Dead.

Winterfell lives to tell the tale.