Jeh’s tantrums in the last picture of Kareena Kapoor’s post have left his family, friends and fans in splits 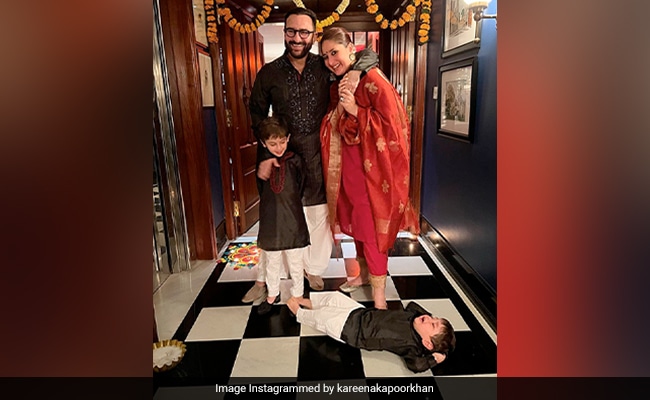 How hard is it to get kids ready for a photo? The answer lies in Kareena Kapoor's latest Diwali post, which is as real as it gets. The actress, on Diwali, wished her fans by sharing beautiful family pictures from her home. However, it is the last image of her album that is winning the Internet. It shows that Kareena, too, has to deal with her kids' tantrums. Any guesses who the centre of attention is here? Little Jeh. The post comprising four photos starts with Kareena Kapoor and Saif Ali Khan posing at the entrance of their house. She looks pretty in a rusty orange kurta set as she side-hugs Saif, who is dressed in a black kurta and white pyjamas. The next image shows the couple smiling and laughing, followed by a picture of Jeh and his big brother Taimur looking out a well-decorated window.

Now comes the fourth and last picture which is literally kids everywhere. Jeh, not in the mood for a family photo, is seen laying on the floor and crying as Kareena Kapoor, Saif Ali Khan and Taimur pose for the camera. They are laughing at Jeh's reaction. Saif Ali Khan and his sons wore matching black kurtas and white pyjamas for Diwali festivities.

Sharing the photos, Kareena Kapoor wrote: “This is Us [heart icon] From mine to yours… Happy Diwali friends [heart icon] Stay Blessed.”

Jeh's tantrums in the last picture of Kareena Kapoor's post have left his family, friends and fans in splits. Her cousin Zahan Kapoor commented: “The last image is just tooooo good” with a laughing emoji. Alia Bhatt, who is expecting her first child with her husband Ranbir Kapoor, wrote, “Cutest” with a bunch of red heart icons. Saif's sister Saba Pataudi added a dash of humour to her comment: “Wishing you love light and luck ...getting Jeh jaan to pose! Happy Diwali.”

Social media influencer Kusha Kapila's favourite picture was the fourth one. “It's the last picture for me,” she wrote with a laughing icon. Digital creator Sneha Menon Desai commented: “Normalizing the toddler meltdown! Love it.”

Kareena Kapoor fans couldn't get enough of little Jeh's actions in the photo album. “Last pic is so beautiful, Jeh, love you,” commented one user while another wrote, “Hahahaha last picture is the actual depiction of family pictures.”

The actress also celebrated the festival with her sister Karisma Kapoor, parents Randhir and Babita Kapoor, as well as other family members. “Parivaar,” wrote Kareena Kapoor for this family photo.

For Pathaan, Deepika Padukone Was On "Most Difficult Workout, Diet"