"The Exhaustion Is Unreal": Kriti Kharbanda Is Back To Pole Dancing And How

"The satisfaction and happiness is something else," wrote Kriti Kharbanda 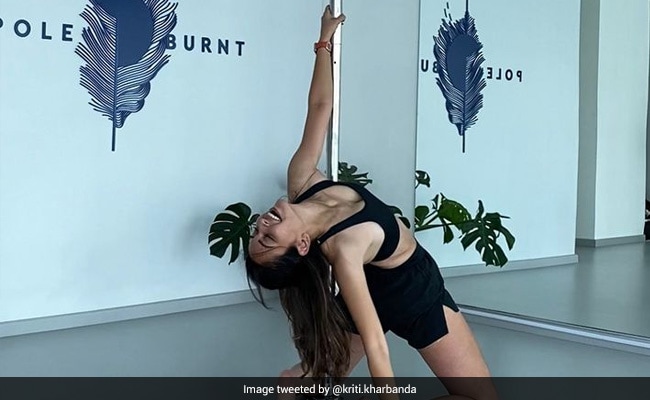 Kriti Kharbanda is back to doing what she loves best - pole dancing. The 30-year-old actress shared a glimpse of her pole dancing session on Instagram and added this adorable caption: "Hello pole! We meet again." That's how much Kriti Kharbanda missed it! Talking about returning to pole dancing, Kriti Kharbanda added how "exhausting" and "satisfying" the activity is for her. "Man oh man, the exhaustion is unreal, but the satisfaction and happiness is something else," she wrote. In the photo, Kriti Kharbanda, dressed in black, can be seen in the middle of a pole dancing session. Meanwhile, Kriti's Instafam showered her feed with the first and the heart-eyed emojis, cheering for her for setting major fitness goals.

Last year, when the nationwide lockdown was imposed because of the pandemic, Kriti Kharbanda shared this post: "Throwback to my favourite form of work-out! Definitely regret not installing a pole at home. Adding this to my to-do list post the lockdown! What's on your list? What do you really miss doing?"

Earlier, Kriti had shared this ROFL collage of a pole dancing face-off of sorts, which comprised a picture of herself on the pole, juxtaposed with boyfriend Pulkit Samrat's rendition of the pole dance.

Trending: Salman Khan's Response To Troll Who Said "Want My Money Back"