'The Best Thing About Hrithik Roshan Is...': What Super 30's Young Actors Said

In the clip, the students can be seen sharing their experiences of working with Hrithik Roshan. 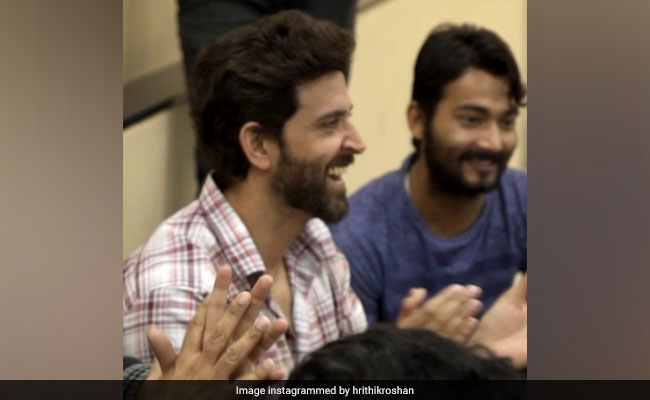 Hrithik Roshan in a still from the video. (Image courtesy: hrithikroshan)

Hrithik Roshan's Super 30, which is now tax-free in five states including Delhi, is getting a whole lot of love for retelling the story of Patna-based mathematician Anand Kumar, who trains a batch of 30 students for the Indian Institutes of Technology entrance exam every year. Keeping the excitement level high for his film, Hrithik Roshan recently shared a BTS video on Instagram, which showcases the journey of his Super 30 'students' from their shooting days. In the clip, the students can be seen sharing their experiences of working with Hrithik Roshan. The video shows Hrithik Roshan sharing light moments with the young actors from rehearsal classes and from the sets. It also features glimpses of the young actors' stay in Mumbai and how they bonded with each other while filming.

"When I met Hrithik sir for the first time, I was really amazed. It took time to realize that yes, we are going to work with him," said one of the child actors. Later in the video, when asked what made filming special with Hrithik Roshan, another actor said: "The best thing about Hrithik sir is that he makes eye contact during the shoots, which boosts confidence in us."

Sharing the video, Hrithik Roshan wrote: "How beautiful are these souls."

Reacting to the video, the film's actress Mrunal Thakur dropped a comment: "Such sweethearts." Like we mentioned above, Super 30 has been declared tax-free in five states - Delhi, Rajasthan, Gujarat, Uttar Pradesh and Bihar. On Wednesday, Delhi Education Minister Manish Sisodia tweeted that the Delhi government has made Super 30 tax-free so that 'it can inspire students and teachers in Delhi.' To this, Hrithik Roshan replied: "Thank you Shri Manish Sisodia ji for considering us worthy of being a part of the nation builders team and announcing Super 30 tax-free in Delhi."

Delhi Govt will be giving tax-free status to the movie 'Super 30', so that it can inspire students and teachers in Delhi (2/3)#Super30@iHrithik@teacheranand

Thank you Shri Manish Sisodia ji for considering us worthy of being a part of the nation builders team and announcing Super 30 tax - free in Delhi. https://t.co/wzY1QkR1iFpic.twitter.com/jj8GN1kteC

Released on July 12, Super 30 is performing well at the box office as its overall collections so far have reached over Rs 107 crore.