Trishala delighted her Instafam with a pure gold photo of herself with dad Sanjay Dutt and captioned it, "A blast from the past" 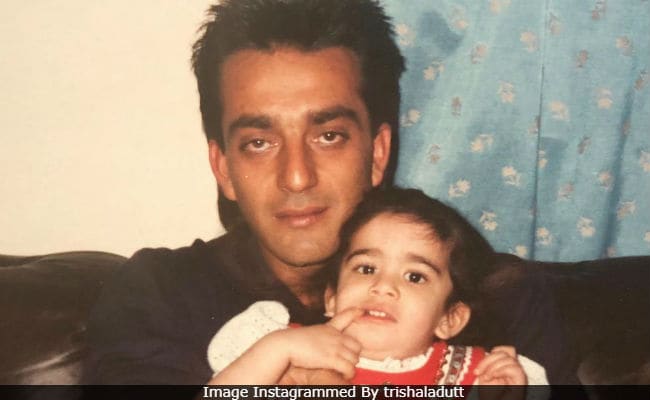 No, it's not Thursday yet. But we guess actor Sanjay Dutt's daughter Trishala didn't really want to wait till Thursday to share this cute throwback photo with her dad. (We're glad). Trishala, 30, delighted her Instafam with a pure gold photo of herself with Sanjay Dutt and captioned it, "A blast from the past," adding a heart emoticon. In the picture, little Trishala is cradled in her dad's arms and the duo pose for the cameras. "How cute? Best picture of yours" and "looks like the Khalnayak days" are some of the comments on Trishala's post. Khalnayak is one of Sanjay Dutt's most iconic film of the 90s, in which he co-starred with Madhuri Dixit and Jackie Shroff.

Trishala's Instagram is full of her pictures with Sanjay Dutt or 'Papa Dukes.' On Father's Day, she shared another throwback picture with him and wrote, "The love between a father and a daughter knows no distance. Happy Father's Day to my real life hero, my one and only, the real OG, Sanjay Dutt. I love you very, very much."

The love between father & daughter knows no distance Happy Fathers Day to my real life hero, my one & only, the real OG @duttsanjay love you very, very much. #fatheranddaughter #tbt #iloveyouthemostest #happyfathersday #pops #mydaddystrongest

Here are some of the other pictures she shared previously.

Trishala is is Sanjay Dutt's daughter with his first wife Richa Sharma, who died after battling brain tumour in 1996. Trishala stays in the US with her maternal grandparents. Sanjay Dutt is married to Maanyata and the couple are parents to 8-year-old twins Shahraan and Iqra. Trishala and Maanyata often trend for their Instagram exchanges.

Trishala recently completed her Masters in Psychology from Hofstra University.