That's Arjun, Anshula, Janhvi And Rhea Kapoor In This Pic. Guess Who's Who

Arjun and Janhvi Kapoor are actors while Khushi is currently studying films in the US. 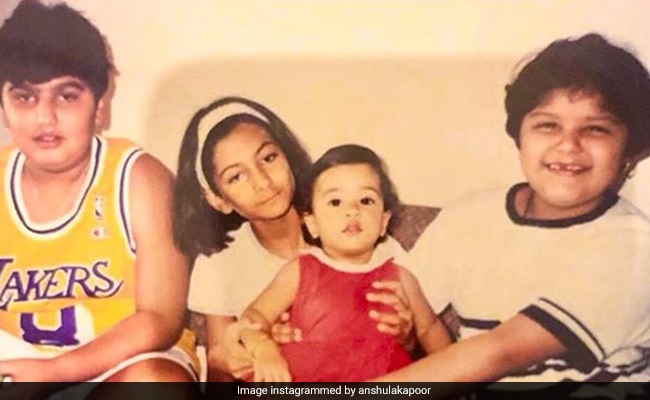 Anshula Kapoor took a trip down the memory lane and shared a picture from her childhood album, which also featured her brother Arjun Kapoor, sister Janhvi Kapoor and cousin Rhea Kapoor. Can you guess who's who? Well, Arjun Kapoor is on the extreme left sitting with Rhea Kapoor, who holds baby Janhvi Kapoor as Anshula poses with a grin on her face. She captioned the post, "That missing tooth though #KapoorJunior #WhereThemEyesAt." Anshula and Arjun are children of Boney Kapoor and his first wife Mona Shourie while Janhvi is the daughter of Boney Kapoor and Sridevi. Janhvi's younger sister is Khushi. Rhea is the daughter of Boney Kapoor's brother Anil Kapoor and Sunita Kapoor. Her siblings are Sonam and Harshvardhan Kapoor.

Arjun and Janhvi Kapoor are actors while Khushi is currently studying films in the US. So far, Anshula hasn't talked about opting a career in films. Arjun Kapoor debuted in 2012 film Ishaqzaade and he went on to star in films like 2 States, Ki & Ka and India's Most Wanted. He's currently awaiting the release of Sandeep Aur Pinky Farar and he's filming Ashutosh Gowariker's Panipat.

Janhvi Kapoor is fairly new to Bollywood - she debuted in 2018 film Dhadak. Her upcoming projects are Gunjan Saxena: The Kargil Girl, RoohiAfza with Rajkummar Rao and Ghost Stories.

In September, Khushi Kapoor took off for the New York Film Academy, where she has enrolled for a course in films. Janhvi recently took time out from her busy schedule to catch up with Khushi.