"This was a learning experience for me," said Salman Khan 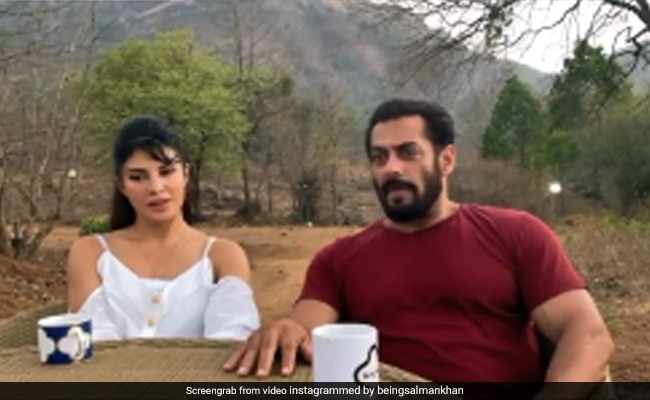 Salman Khan and Jacqueline Fernandez are having the most productive lockdown at Salman's farmhouse in Panvel. The Bollywood actors recently shot a music video for a song titled Tere Bina which has been sung by Salman Khan himself. Salman, on Friday, shared an IGTV video where he and Jacqueline spoke about the music video to actor Waluscha De Sousa. Interviewed by Waluscha, Salman Khan said that he had the song Tere Bina and it didn't fit any film, so he decided to shoot a music video for it. He also said that shooting it in his farmhouse was "a learning experience." Jacqueline said, "We are used to shooting songs on very big productions, taking a large amount of day, costume, hair makeup and weeks of prep but all of a sudden we find ourselves working with a team of three people (Salman, Jacqueline and a DOP). For the first time I found myself checking lighting and moving props around. It was a great experience to know that you can use what comes your way and make the most of any situation." Salman further added, "I was the director and the producer of the music video."Take a look:

Speaking of the struggle of shooting a music video with only three people, Salman added, "You don't need a hairstylist, you don't need makeup. This was a learning experience for me that three people can very easily shoot a song" He also said, "We faced internet issues in sending the video clips to the editors. Everyone is using wifi. The internet speed was so slow. It used to take us 24-36 hours to download some files. Everything went back and forth for 70-80 times."

Salman Khan, who is staying in his Panvel farmhouse with his actress friends, his rumoured girlfriend Iulia Vantur, his sister Arpita Khan Sharma and her family, keeps sharing snippets of his home diaries on his Instagram profile. A few weeks ago, Salman trended a great deal for sharing a video of him having breakfast with his horse. "Breakfast with my love," wrote Salman. Take a look:

He also got "taken for a ride" after that.

On the work front, Salman Khan was last seen in the 2019 action-comedy Dabangg 3. He will next be seen in Radhe: Your Most Wanted Bhai co-starring Disha Patani, Randeep Hooda and Jackie Shroff.