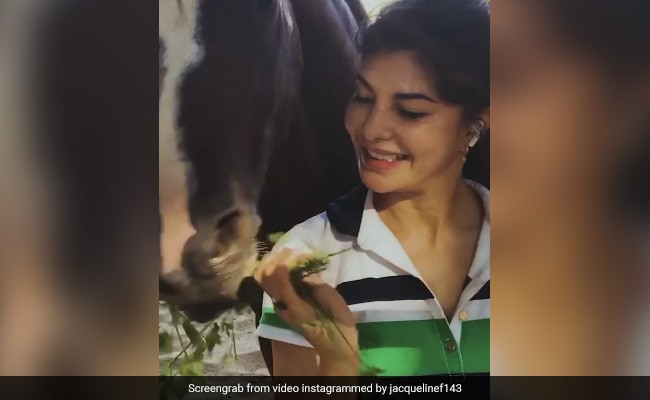 Jacqueline Fernandez in a still from the video. (Image courtesy: Instagram)

Jacqueline Fernandez, who is currently living with Salman Khan in his Panvel farmhouse, gave us a sneak peek into her well-spent day at the ranch. The actress shot a "little film" on what is believed to be her mobile phone and showed her fans the numerous ways in which she is keeping busy at the farmhouse during the lockdown. Jacqueline shot the film on several locations in and around the farmhouse and captured the scenic beauty in her clip. The video starts with Jacqueline welcoming a new day and shows her indulging in other day-to-day activities such as bathing, feeding and riding a horse, drying her clothes, making herself a coffee, writing a note to "Dear Quarantine," playing with pet animals, climbing a coconut tree and picking berries.

Along with Salman's sister Arpita Khan Sharma and her family, the actor's rumoured girlfriend Iulia Vantur and Jacqueline also moved to his Panvel farmhouse a couple of days before Indian went into nationwide lockdown, which is extended till the third week of May.

Jacqueline, in her previous posts, shared a picture of Salman exercising in his farmhouse. She was even "caught" clicking the actor's work-out photo "chori chori." Salman even shared the picture of the actress sneakily taking his photo and wrote: "Jacky got caught taking a pic chori chori chupke chupke... she took one more after that which she will post on her own!"

Jacky got caught taking a pic chori chori Chupke chupke... she took one more after that which she will post on her own! @jacquelinef143

And here's the photo Salman mentioned in his post:

Gifted or just very hard working?? I feel he's grateful for everyday and respects the position the Almighty has given him @beingsalmankhan to all the Salman Khan fans, there's a lot more to come, stay tuned, stay safe! #lockdown #pyaarkarona

Coming back to Jacqueline Fernandez, the actress was last seen in the recently-released Netflix's film Mrs Serial Killer. She co-starred with Manoj Bajpayee and Mohit Raina in the film.