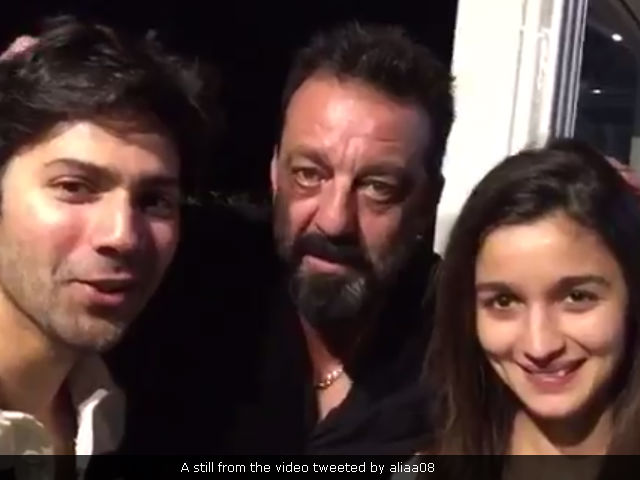 New Delhi: Actors Alia Bhatt and Varun Dhawan have revived Nineties chartbuster Tamma Tamma Loge in their upcoming film Badrinath ki Dulhania. The actors will dance to the hit track from 1990 film Thanedaar which was originally picturized on Sanjay Dutt and Madhuri Dixit. And now, after Madhuri Dixit taking Tamma Tamma tutorial for Alia and Varun, actor Sanjay Dutt praised them and said that they are 'magic.' Alia Bhatt, 23, posted Sanjay Dutt's message on Twitter on Friday, in which he said: "Tamma Tamma is releasing tomorrow. You're going to watch these kids... they are magic. Alia and Varun, who can be seen in the video with Sanjay Dutt grin from ear-to-ear.

Earlier, Alia shared a video in which Madhuri Dixit helped the duo in a tight spot while they were rehearsing the Tamma Tamma moves.

Promoted
Listen to the latest songs, only on JioSaavn.com
Badrinath ki Dulhania producer Karan Johar, has apparently adopted remixing of hit tracks as a mantra for the film's publicity. For example Kala Chashma 2.0 was more popular than the other songs in Baar Baar Dekho and most of the film's publicity was also based on the track originally created by Amar Arshi in 2000.