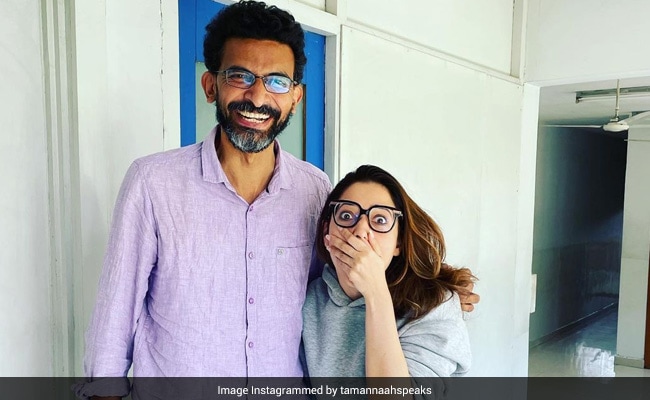 Actress Tamannaah Bhatia is quite active on social media. Over the past few days, she has posted clips from a song of one of her forthcoming movies, teaser of her Telugu web series and a series of photos from what looks like a wedding ceremony in Jaipur. However, what caught our attention was her latest post - a happy reunion with filmmaker Sekhar Kammula. The actor-director duo earlier worked together in the superhit Telugu musical Happy Days. It was considered a breakthrough role for Tamannaah. Recently, she bumped into the filmmaker and shared pictures of their sudden meeting.

In the caption, the Baahubali actress wrote, "Look who did I just bump into. @kammula.sekhar Sir - the man who kick started the "Happy Days" in my life. (sic)" She also wished him for his next movie, saying, "Super excited for his upcoming release Love Story with @chayakkineni and @saipallavi.senthamarai. (sic)" In the pic, Tamannaah sports a casual street style look, donning a grey crop top paired with blue denim and geeky glasses.

Kammula's film Love Story features Chaitanya Akkineni and Sai Pallavi. It revolves around a small-town boy who moves to the city. While talking about the movie, in a recent interview, Kammula said: "Ever since we released the teaser of the film, we have received phenomenal response. Though this is just an introduction of the lead characters of the film, Revanth (Naga Chaitanya) and Mounica (Sai Pallavi), there is so much more in store."

On the other hand, Tamannaah is working on her upcoming Telugu sports drama, Seeti Maar. She is prepping up for the role of a kabaddi coach named Jwala Singh. She is also reported to be a part of a comedy film produced by Riteish Deshmukh.