Taimur On Ukelele, Cheered On By Uncle Zahan Kapoor 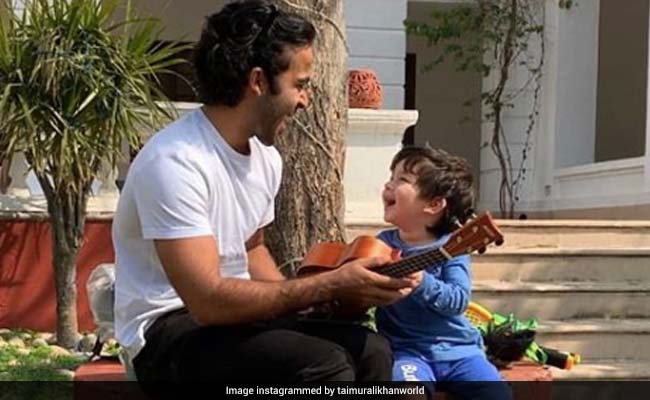 Taimur and Zahan Kapoor from the Pataudi Palace (courtesy taimuralikhanworld)

A massive Kapoor fam-jam at the Pataudi Palace appears to be underway, glimpses of which have made their way to social media. We were recently treated to a family photo of Kareena Kapoor, Taimur and Saif Ali Khan twinning in blue and now, Kunal Kapoor's (Kareena's uncle) son and daughter - Zahan and Shaira - shared more updates from the Pataudi Palace. And, they are going crazy viral because Taimur features in them. Shaira shared a video of Taimur and Zahan chilling on the lawns of the Pataudi Palace, in which Taimur keeps on strumming a ukulele and looks at Zahan for approval. He cheers on for Taimur, who giggles and keeps playing. Trust us when we say this, Taimur's smile is the sweetest thing you will see today!

"The return of ZaZa and TimTim," Shaira had captioned the posts, which were re-shared on fan-clubs.

Tim is having fun with his Zahan mamu

Over the weekend, a photo of Taimur playing with a furry friend in the gardens of the Pataudi Palace sent the Internet into a meltdown. Kareena and Taimur were twinning in matching sweaters while Saif Ali Khan also featured with the two in the winter morning photo.

We were also treated to a glimpse of Kunal Kapoor and Saif Ali Khan enjoying winter vibes on the Pataudi Palace lawns: "Andaaz-e-Nawaab. On a crisp winter afternoon, out on the beautiful lawns, in the shadow of Ibrahim Manzil, two great men shared a laugh," Zahan captioned the photo on his Instagram.