Kareena Kapoor, Saif Ali Khan and Taimur's photo appears to be from the Pataudi Palace 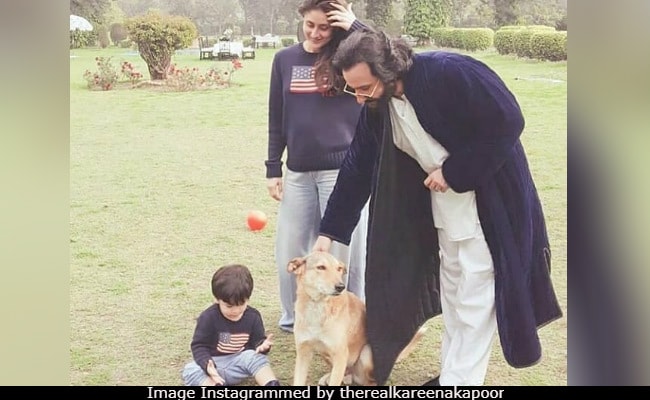 Guess what? We spotted an adorable photo of Kareena Kapoor, Saif Ali Khan and little Taimur, which can truly redefine family goals. In the photo, which has been made to go viral by fan clubs, Kareena and Taimur can be seen twinning in matching blue sweaters while Saif too joins the colour coordinated duo in blue. Taimur can be seen playing with a furry friend in the photo, which appears to have been taken at the Pataudi Palace, as one can see sprawling lawn in the background. Meanwhile, "adorable" and "family goals" are the comments that have poured down on the feed. Saif Ali Khan and Kareena Kapoor married in 2012 and Taimur was born in 2016.

How cute are these three together?

This family photo reminds us of similar ones from Taimur's first birthday in December 2017, when the Kapoors got together at the Pataudi Palace for a few days and we were treated to delightful photos from the fam-jam.

Meanwhile, we really missed seeing Taimur in the photos from Randhir Kapoor's 72nd birthday celebrations. Saif and Kareena partied with Karisma Kapoor and her daughter Samiera and cousins Aadar and Armaan Jain on Randhir Kapoor's birthday. Karisma shared glimpses from the party on Instagram:

Kareena Kapoor, along with Priyanka Chopra, will wrap the current season of Karan Johar's Koffee With Karan next Sunday. On the work front, she is filming Good News with Akshay Kumar and she recently took along Taimur on the sets of the film. Saif Ali Khan is currently busy shooting for the second season of Sacred Games and is also often spotted taking Taimur along.