"Really? Very cheeky of you Saifu to be asking this on national radio but either way, I think I should answer it," said Kareena Kapoor 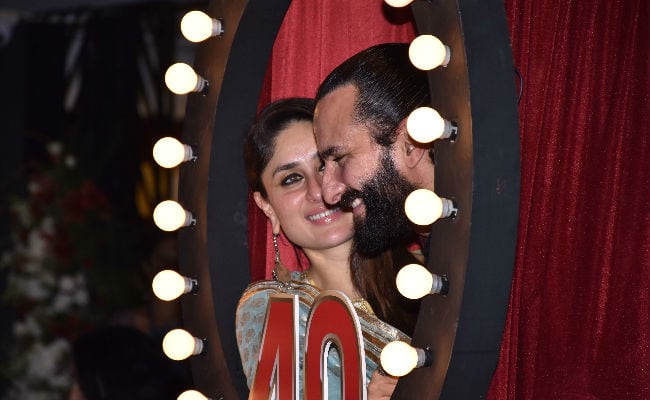 Kareena Kapoor, who hosts a radio show on Ishq FM, got asked a question she reviewed as "cheeky" from none other than her husband Saif Ali Khan. The Sacred Games actor joined a session of "Bebology" (a segment dedicated to a Q & A round) and asked Kareena for relationship advice after a couple become parents. Saif, who appeared that the question was being asked generally, with no particular personal interest in mind, started by saying: "You know how it's like... once you've had a baby, people say that relationships and things change and wives get like really into the child and the relationship changes slightly or you know she's busy and doesn't have much time. Is there any way - this is my question - that a husband can get more attention or make his wife happier post baby? Are there any tips you can give us in this direction?"

Saif Ali Khan, also known for his unapologetic sense of humour, rounded off his question with a personal sign-off note: "All the best, see you at home!" Lol. Saif Ali Khan and Kareena Kapoor married in 2012 and baby Taimur was born in the December of 2016.

The 38-year-old actress, who often takes along Taimur to work and shoot sets, had the most honest reply for Saif: "Really? Very cheeky of you Saifu to be asking this on national radio but either way, I think I should answer it. I think a husband should just BE there for the wife. Baby means bahut saari extra responsibilities and wo share karne se wife bahut khush ho jayegi I'm sure."

Kareena had more to answer and added that a romantic date always makes one happier! "As for attention, plan a nice date for her... kahin romantic location pe... you know... without the baby and then see the magic... haan? Aur agar wife bole ki use baby ke saath time spend karna hai, toh bura maat mano (and if your wife says she wants to spend time with the baby, don't feel bad, okay?). It doesn't mean she loves you any less. It just means thode time ke liye uska perspective change ho gaya hai"

"Anyway, hoping for a nice romantic date from you soon, Saifu. The class is now dismissed," she added!

While Saif's query on "attention" issues was aptly answered by Kareena Kapoor, she has often confessed to getting worried over the media attention Taimur gets. In interviews, Kareena had earlier said that the paparazzi's obsession with Taimur makes her "paranoid" and she things it's "scary." Meanwhile it appears that Taimur has adjusted to the ways of being a star baby. He often acknowledges the shutterbugs with smiles and also recently told a bunch of photographers: "It's Tim!" when they called out his name.

Slicing out time for a date shouldn't be a problem for Saif Ali Khan, who is currently busy with the upcoming season of Netflix's Sacred Games. Meanwhile, Kareena Kapoor will next be seen in Good News, co-starring Akshay Kumar, Diljit Dosanjh and Kiara Advani.