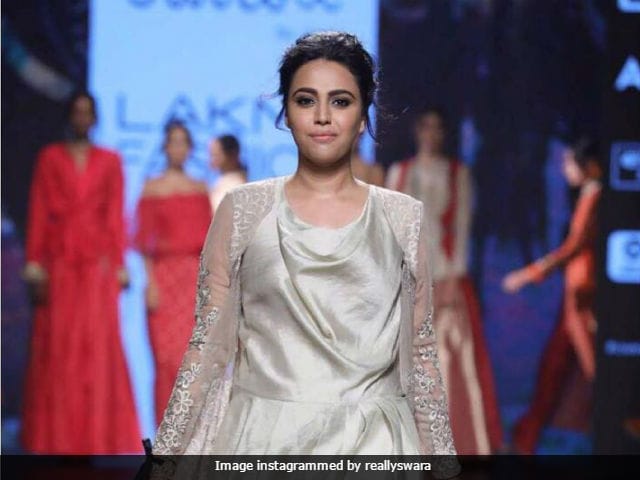 New Delhi: Actress Swara Bhaskar, who was last seen in Avinash Das' film Anaarkali Of Aarah, spoke about her encounter with molestation in an interview to DNA. The 29-year-old actress revealed that she was molested during the promotions of Prem Ratan Dhan Payo in Rajkot. "I have been groped during Prem Ratan Dhan Payo when we landed at Rajkot. I was travelling with Salman Sir and nobody realised, but there were around 2,000 people at the airport to see him. Despite the fact there was security, people got in and it was Anupam Kher who made sure I got into the car. It was crazy," DNA quoted Swara Bhaskar as saying.

"As a female artiste, you know the feeling of being vulnerable in front of a crowd, which is why I connected with my character Anaarkali. You know that when we were shooting the Holi scene in Ranjhanaa, the production has put five boys from the AD team around us in that get-up, to protect us from the rest of the crowd," the Tanu Weds Manu actress added.

The Raanjhanaa actress told DNA that women, in any part of the world, especially India, cannot grow up without ever being 'molested' by a man. "It is not possible. I have been molested. Interestingly, I have been molested and eve-teased in Mumbai as much as I have had to deal with it in Delhi," DNA quoted Swara Bhaskar as saying.

Recollecting her horrific experiences in both cities, the Nil Battey Sannata actress told DNA: "The first time, I slapped a guy for pinching me in Old Delhi. There used to be a Sunday book bazaar there, so I caught hold of the guy. These people don't expect women to react which is why it's all the more important for women to react. Because the whole mentality of a molester, groper and an eve-teaser is the anonymity and the confidence that the girl won't react. The moment you instill that fear in their head that the girl may react and she can beat the s**t out of them, they tend to stay away. I have hit people in Delhi, Chennai and sometimes, I have chased people."