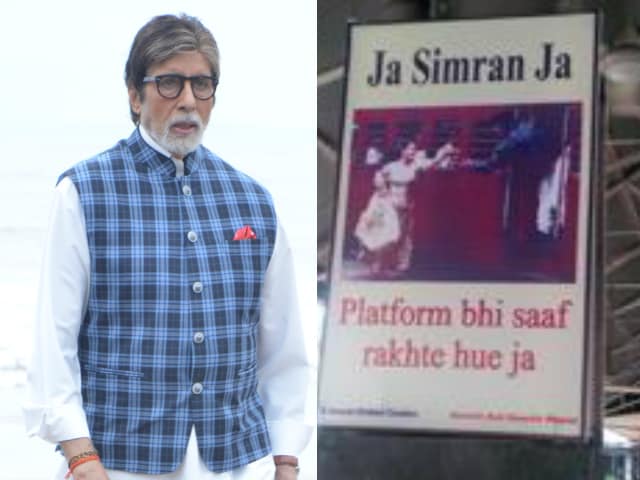 New Delhi: Amitabh Bachchan found more than one ways to spread awareness about the need for cleanliness across India on Swachhta Diwas as part of the government's Swachh Bharat India Campaign. Big B, who is currently headlining NDTV-Dettol Banega Swachh India Campaign as the brand ambassador, shared messages for all his fans in a rather filmy-style. India is observing Swachh Bharat Diwas on October 2, the birth anniversary of Mahatma Gandhi.

Big B, who was speaking at NDTV's clean-up initiative at the Juhu beach on Sunday, told NDTV that he found reworked posters of films like Dilwale Dulhaniya Le Jayenge, Anand and Deewar (in which he co-starred with Shashi Kapoor), rather interesting. Subsequently, he shared them on social media.

You just can't miss the message each of them has to convey:

Promoted
Listen to the latest songs, only on JioSaavn.com
"It's wonderful to have this festival or event on Gandhi Jayanti. If we can just take the responsibility of cleaning 10 yards of where we live, in a sense we can clean up the entire city. It's a very simple thing but if work at it, we can go a long way," Mr Bachchan said, who also met legendary classical singer Pandit Jasraj as part of NDTV-Dettol Banega Swachh India Campaign on Sunday.

The Government of India has zeroed in on 10 iconic places to for the clean-up drive including Taj Mahal, Ajmer Sharif and Vaishno Devi temple to convert them into examples of cleanliness. Commenting on the initiative, Mr Bachchan said, "These iconic places are the most visited by tourists, so it's a good thing to keep them clean. This initiative is to create an impression. So, clean up places and send a message across the country."

Amitabh Bachchan, 73, last featured as a lawyer in Aniruddha Roy Chowdhury's courtroom drama  Pink, which has garnered critical success and widespread admiration from the audience.