"My first ever commercial with my darling Sush," wrote Rohit Roy 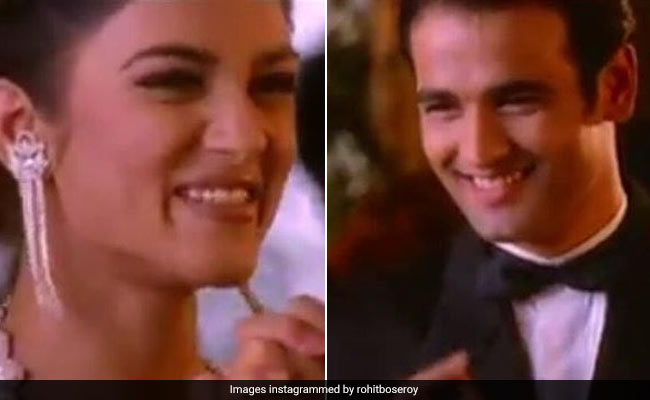 Sushmita Sen, who was crowned Miss Universe in 1994, occupied a spot on the list of trends on Wednesday, courtesy glimpses of her old commercial with actor Rohit Roy that was shot soon after her big win. On Tuesday, Rohit Roy posted a photo collage comprising stills from his "first-ever" advertisement that he had shot with Sushmita Sen for the cosmetics brand Camay. However, it was his caption that caught the attention of their fans. Rohit revealed that back then, people asked if he was her "real boyfriend" after watching the ad during its pre-release promotions. The commercial has snippets of Sushmita Sen from the beauty pageant.

"My first ever commercial with my darling Sush 'the amazing sen', freshly back from the crowning! What times and what a commercial for #camay soaps! The often-asked question in pre-release viewer reactions was - Is he her real boyfriend!" wrote Rohit Roy and added: "Actor toh tab bhi solid tha boss! Love you, Sushmita Sen."

And here's the aforementioned commercial for Camay featuring Sushmita Sen and Rohit Roy:

Sushmita Sen created history by bringing the Miss Universe title to India for the first time in 1994. She was also crowned Miss India in 1994. Sushmita won the Miss India title after she toppled Aishwarya Rai, who took the second place.

In terms of work, Sushmita Sen made her Bollywood debut in the 1996 film Dastak. She has featured in films such as Biwi No 1, Do Knot Disturb, Main Hoon Na, Maine Pyaar Kyun Kiya and Tumko Na Bhool Paayenge. She was last seen in 2015's Bengali film Nirbaak.