"I've been her official choice of hairdresser since she was 3 years old," wrote Sushmita Sen 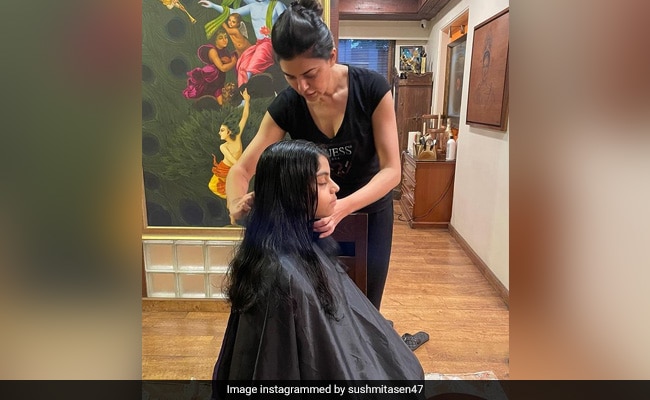 Sushmita Sen loves to share posts from different facets of her life. On Saturday night, she shared a picture, in which she can be seen giving daughter Alisah a haircut. The picture was clicked by Sushmita's elder daughter Renee. Sharing the picture on social media, the actress wrote: "Busy weekend anyone? Alisah has a way of making me feel really important... I've been her official choice of hairdresser since she was 3 years old! While I am all stressed to cut her hair, she simply meditates! Love her confidence." She added the hashtags #sharing, #simplejoys, #mammahood." The former beauty queen signed off her post with these words: "Nice shot Renee Sen. I love you guys. Happy weekend."

Sushmita Sen is a mother to two daughters - Renee, 21, and Alisah, 12. Sushmita, who decided to be a single parent through adoption at the age of 24, describes it as the "wisest decision" of her life.

Sushmita Sen made her digital debut with the web-series Aarya last year, which is streaming on Disney+Hotstar. The show also featured Chandrachur Singh, Sikandar Kher, Namit Das, Ankur Bhatia and Alexx ONell in pivotal roles. The series marked Sushmita Sen's comeback in showbiz. She was last seen as a judge in Fashion Superstar, alongside Manish Malhotra.