Sushmita Sen wrote, "It's magical to realise I am the one who's been mothered all along. I love you guys." 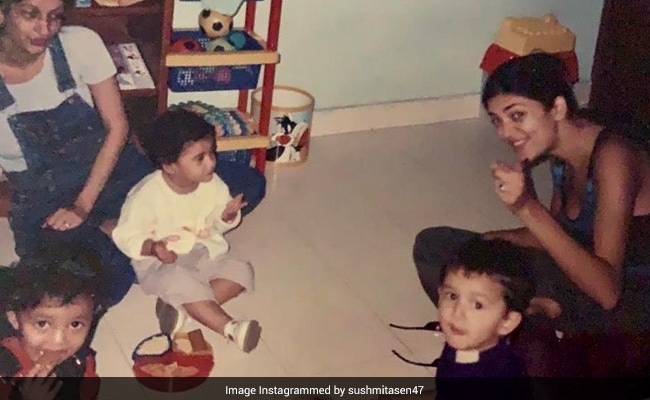 Aarya actress Sushmita Sen shared a throwback picture from her daughter Renee's childhood album and wrote that looking back she feels she was "mothered all along." In the picture, Sushmita appears to be on a play date. Sushmita Sen adopted Renee in 2000 and then Alisah in 2010. "Sometimes I look at these pictures and wonder, when I see Renee and me even at age 2 years and 26-years-old... the child was always me!!! It's magical to realise I am the one who's been mothered all along. I love you guys."

Sometimes I look at these pictures & wonder, when I see Renee & me even at age 2 yrs & 26yrs old...the child was always me!!! It's magical to realise I am the one who's been mothered all along!!! #sharing #precious #memories #mother #daughter #journey I love you guys!!! #duggadugga

Work-wise, Sushmita Sen was recently seen in Hotstar Specials web-series Aarya, which is an adaptation of Dutch drama series Penoza.

In a promotional interview for Aarya, Sushmita Sen said that she sees many similarities between herself and her onscreen character Aarya, as mothers. "There is a lot of me in Aarya. As a mother, I am very protective about my children. I am not a fussy mother. I can be a task mom and so is Aarya and that aspect has been brought by Sushmita into Aarya. There is a lot of fight in Aarya which is again something that I have abundantly in me," PTI reported Sushmita Sen as saying.

The first season of Aarya received decent reviews and the show ended with the promise of at least another season. The show also featured Chandrachur Singh, Sikandar Kher, Ankur Bhatia, Maya Sarao and Sugandha Garg.