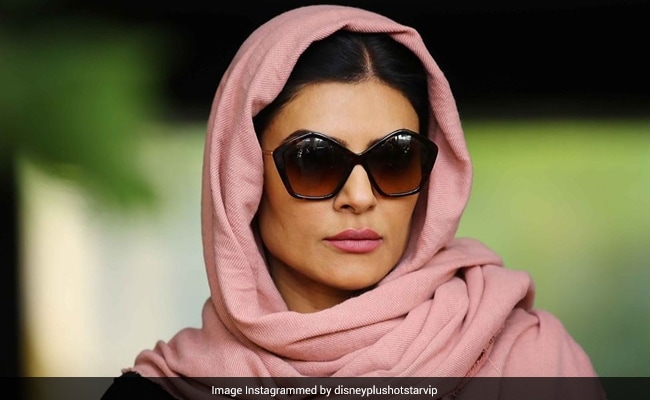 Sushmita Sen in a still from Aarya (courtesy disneyplushotstarvip )

Salman Khan, who has co-starred with Sushmita Sen in films such as Biwi No 1 and Maine Pyaar Kyun Kiya, gave a shout out to the actress for making a rocking comeback with web-series Aarya. Modifying a dialogue by Salman Khan's Dabangg character Chulbul Pandey, the actor tweeted: "Swagat toh karo Aarya ka! What a comeback and what a show! Congratulations, Sushmita Sen. Aur dher saara pyaar!" In the video message, Salman also shared a few of his favourite dialogues spoken by Sushmita Sen in Aarya. To sum up how much he loved Sushmita's performance and her show Aarya, Salman reacted with this Wanted-style dialogue: "Ek baar jo maine pehla episode dekh liya, uske baad, saare episode dekhe bina, main nahi uthta." The original one spoken by Salman Khan's character in Wanted was: "Ek baar jo maine commitment kar di, toh phir main khudki bhi nahi sunta."

Directed by Ram Madhvani, who helmed Neerja, the Disney+Hostar special show Aarya is based on Dutch drama series Penoza. Sushmita Sen plays the titular role and the series tracks her transformation from a family-oriented woman to someone who picks up the gun to protect her family and tie the loose ends of her husband's murky business. In an interview with news agency PTI, Sushmita said: "By God's grace, I got the most incredible beautiful content, a fantastic platform, Hotstar. For me, this culmination of everything coming together has been because I gave it time, I gave my everything to wait. I said I will sit at home but when I do something it has to be worth it. And I can proudly say it now."

In NDTV's review, Sushmita Sen's portrayal of the titular character was described as: "...it is left to Sushmita Sen to hold the series together with her natural ability to fill every frame with her commanding presence."

Aarya premiered on Disney+Hotstar on June 19.