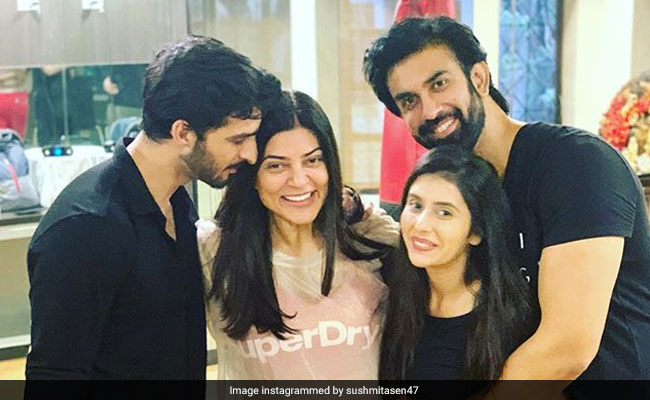 Sushmita Sen, with much enthusiasm, recently announced that her brother Rajeev Sen is now engaged to his girlfriend Charu Asopa in her congratulatory Instagram post. Sushmita Sen shared few photos of the couple and wrote: "She said 'YES.' You're the luckiest guy in the world Raja bhaiya. Thank you for bringing this angel into our lives. Congratulations my sweethearts Charu and Rajeev." Adding to the excitement about the engagement, Sushmita Sen further wrote in the caption: "Can't wait for the wedding. I will dance for both sides! I love you both beyond." While Rajeev Sen and Charu Asopa are all set to get married, no official date has been announced yet.

Both Rajeev and Charu have reposted Sushmita's post and also the sister-in -laws had an exchange of comments on Sushmita's Instagram. Charu commented on the post saying, "Love you so much didi" and to this, Sushmita replied, "I love you more. So happy you make us all... welcome to the family, shona!" Rajeev Sen is an Indian model and an entrepreneur, whereas Charu Asopa is a T.V actress. Gossip pieces about the couple dating had come into notice around the beginning of this year, when Rajeev frequently started posting pictures with Charu on his Instagram.

SHE SAID "YES You're the luckiest guy in the world Raja bhaiya @rajeevsen9 Thank you for bringing this #Angel into our lives Congratulations my sweethearts Charu @asopacharu & Rajeev @rajeevsen9 Can't wait for the wedding, I will dance for both sides!!!#sharing #happiestnewsever #babybrother #engaged #happiness #newjourney #blessings I love you both beyond #duggadugga

In a new post, Sushmita Sen also shared a couple of pictures, in which the newly engaged Rajeev and Charu feature along with Sushmita and her boyfriend Rohman Shawl. Sharing the pictures, Sushmita wrote: "I love you guys! Thank you for all your blessings. Always keep them coming!" Sushmita Sen is often seen posting pictures with her daughters and also her brother during various occasions.

Sushmita Sen, the first Miss Universe from India, has starred in several Bollywood films and was last seen in a Bengali film Nirbaak in the year 2015.