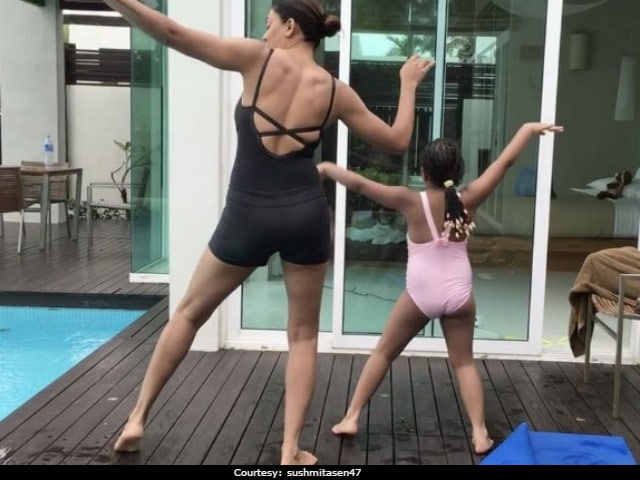 Sushmita and Alisah were dancing at the poolside (courtesy: sushmitasen47)

New Delhi: Actress and former beauty queen Sushmita Sen has a new favourite song on the playlist - it's Ed Sheeran's Shape Of You (not surprising at all!), and dances her heart out in a video she Instagrammed on Sunday. Sushmita has roped in her younger daughter, seven-year-old Alisah, as her dancing partner, and delivers a poolside performance which appears impromptu, especially on Alisah's part. "Alisah with breaded hair owns her moves," Sushmita captioned the video. Viewers, beware, the video might make you roll on the floor laughing for mid-way through the video, Alisah is clearly unable to keep up with Sushmita's moves on the dance floor and ends up cuddling her while Sushmita is still grooving.

Sushmita is also parents to Renee, her teenaged daughter, who also feature in the video, which is actually a montage of moments from Sushmita's beach-side vacation with her daughters.

#frameofmind there is a song I love by #leeannwomack "when you get the chance to sit it out or dance, I hope you dance" these moments (be it around my #friends or my #babies ) are a wonderful reminder that each time a situation suggested to "SIT IT OUT"...WE CHOSE TO DANCE moving to our own beat #anytime #anywhere #anyhow Alisaj with breaded hair owns her moves#toocute Renee saunters down the beach celebrating life with #maa #memories #cherished #happiness #sharing I love you guys!!! #ihopeyoudance

#Hello my #firstlove when #Renee sings..my heart melts and dances in #gratitude She truly sings from the heart...always has!!!ever since her #musical #Maaaaa 17yrs ago she is her happiest when she's singing and always chooses the most difficult songs!!!way to go!!!!we are all soooooo proud of her sisters #Alisah @a_a_l_i_y_a_h_08 and #maa saying 'Hello from the other side'#divinegrace voice of an #angel #precious #sharing love u guys!!!

Renee and Alisah, the two adopted daughters of Sushmita, are the stars of her social media posts. Here are some of them:

Happpyyyyy #holidays travels begin!!! It's time to be with family, surrounded by the warmth of love n laughter!!!!#merrychristmas to you and all your loved ones I celebrate with #YOU mmmuuuaaah

Meanwhile, this is what Sushmita is upto:

First #leg of the #journey begins!!!! Pun Intended!!! weeks of connecting with #America n #Europe LIVE!!!! soooooo much to look forward to!!! warmest hugs n kisses to all of you!!! #takingoff #duggadugga mmmuuuuuaaaah!!!!

Promoted
Listen to the latest songs, only on JioSaavn.com
Sushmita Sen, who won the Miss Universe title in 1994, recently judged at the beauty pageant held in the Philippines. Sushmita made her acting debut with 1996's Dastak and has also starred in films like Biwi No 1, Sirf Tum, Maine Pyar Kyun Kiya?, Main Hoon Na and Filhaal.