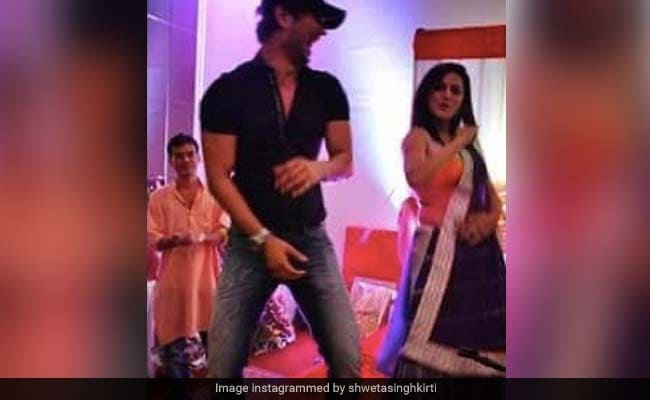 Sushant Singh Rajput's sister Shweta Singh Kirti on Monday shared a collage of herself and the late actor dancing at a family event. In two photos, Mr Rajput and Shweta Singh Kirti can be seen dancing their hearts out while in the third picture, they can be seen posing with their family members. Shweta Singh Kirti wrote, "Bhai and I in May of 2014. We were dancing to the tune of Tu Cheez Badi Hai Mast Mast after 20 long years on the occasion of wedding anniversary of Rani Di (their elder sister Nitu Singh) and Jiju." She also added the hashtags "#MissYouBhai" and "#MyBrotherTheBest." The pictures were taken a year after Sushant Singh Rajput successfully debuted in Bollywood with Kai Po Che!. Sushant Singh Rajput was found dead at his Mumbai apartment on June 14.

Bhai and I in May of 2014. We were dancing to the tune of "Tu Cheez Badi hai mast mast" after 20 long years on the occasion of wedding anniversary of Rani Di and Jiju. #MissYouBhai #MyBrotherTheBest

Earlier, Shweta Singh Kirti shared screenshots of a WhatsApp conversation she had with Mr Rajput on May 22, less than a month before he died. She also shared a moving post on Raksha Bandhan and wrote, "You were, you are and you will always be our pride." She shared pictures of Raksha Bandhan celebrations from her childhood photo album.

The Mumbai Police, who say that the actor died by suicide, launched an investigation into the death of Sushant Singh Rajput in June. The Supreme Court on August 19 accepted the recommendation of the Bihar government for a probe by the Central Bureau of Investigation or CBI into the death of Sushant Singh Rajput. The CBI has questioned actress Rhea Chakroborty and Mr Rajput's flat-mate Siddharth Pithani among others in connection with the investigation.

Sushant Singh Rajput debuted on the small screen with 2008 show Kis Desh Mein Hai Meraa Dil while he became a household name after playing the role of Manav in Ekta Kapoor's Pavitra Rishta for three years. He quit the show to join Bollywood.

After debuting with Kai Po Che!, Mr Rajput went on to feature in movies such as Detective Byomkesh Bakshy!, MS Dhoni: The Untold Story and Chhichhore. Di Bechara, which he completed before the coronavirus-led lockdown, released posthumously on a digital platform.