"Unless you become a father yourself, you can't empathise with this pain, fear and love," said Sunny Deol 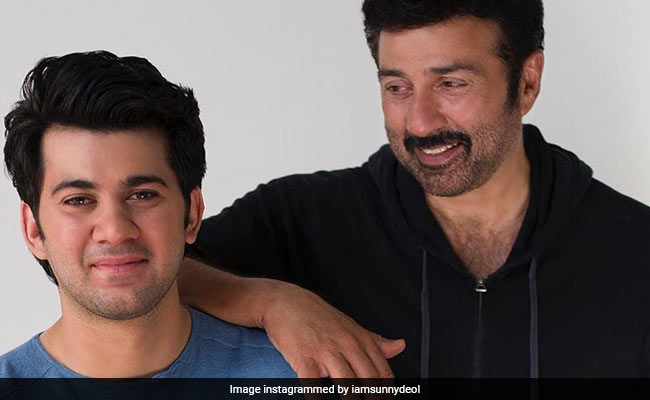 Actor Sunny Deol, who will launch his son Karan Deol in his next directorial film Pal Pal Dil Ke Paas, says it was "taxing" to watch his son film actions sequences for the movie, particularly a 400 feet plummet, as mentioned by Mumbai Mirror. "It was taxing," Sunny Deol told Mumbai Mirror, which also reported that the 62-year-old actor got so nervous that he forgot to record the scene. Karan Deol will mark his debut in Bollywood along with another debutant Sahher Bambba. In the Mumbai Mirror interview, the Gadar: Ek Prem Katha actor said: "I was the first in our generation to be launched and this film made me realise what my dad (Dharmendra Deol) must have gone through during Betaab. Unless you become a father yourself, you can't empathise with this pain, fear and love." Sunny Deol started his film career with 1983 movie Betaab.

Sunny Deol also shared that he feels it is necessary for a "newcomer" to be "fathered" in the film industry. "I remind myself that I did, so he (Karan Deol) will too. Still, given that he comes from a protective family, it's good I've directed his first film. It's important for a newcomer to be fathered and while filmmakers in our time were more approachable, the scenario has changed today," he told the publication.

Further in the interview, Sunny Deol said that his son must "tackle" all challenges by himself. '"Karan must be telling himself that he can and will be able to tackle anything. At that age, you believe you are invincible," he said.

When asked what drew Karan Deol towards films, Sunny said that his son decided to pursue a career in acting after completing high school. "For me, there's no better career than films and if my son wants to dabble in the arts, I couldn't be happier," he told Mumbai Mirror.

Karan Deol is the eldest son of Sunny and Pooja Deol. He has worked an assistant director on Yamla Pagla Deewana 2.Talking about his younger son Rajvir, Sunny Deol said he is planning to launch him soon. "I am open to another director," he said when asked if he will direct him as well.

Earlier in the year, Sunny Deol shared the first look of Pal Pal Dil Ke Paas on social media, which featured his son and the film's lead actress Sahher Bambba.

For a father, it's a moment of pride to look at their children achieve what they have always strived for! .Presenting to you #PalPalKePaas starring
#KaranDeol and #SahherBambba@ZeeStudios_@shariqpatel@SunnySuperSoundpic.twitter.com/9NBheKXyAv

The film is slated to release on September 20 this year.

The wait may have become longer but it will be worth it! #PalPalDilKePaas will now release on 20th September #KaranDeol#SahherBambba@ZeeStudios_@SunnySuperSoundpic.twitter.com/ad4P8Ybig2

On the work front, Sunny Deol was last seen in Behzad Khambata's Blank. The film also featured Karan Kapadia - son of late actress Simple Kapadia. Karan is the nephew of Dimple Kapadia and the cousin of Twinkle Khanna.