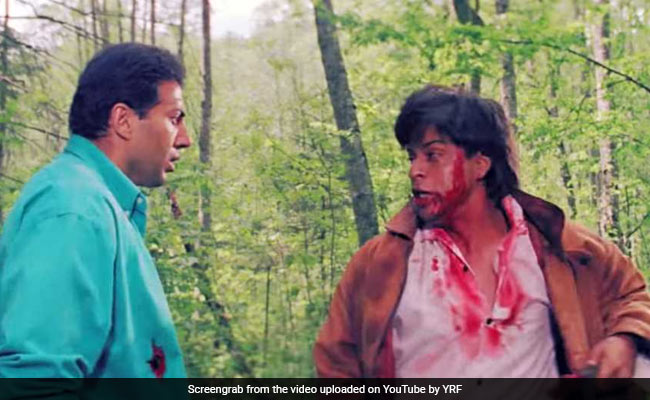 An old interview of actor-politician Sunny Deol, in which he talked about a falling out with director Yash Chopra and co-star Shah Rukh Khan during the filming of 1993's Darr, went viral over the weekend after the interview was re-telecast by India TV. Speaking to India TV's Rajat Sharma, Sunny Deol said that he disagreed with the way his character was portrayed in the film, specifically in the climax in which Shah Rukh Khan's character, the antagonist, stabs Sunny Deol, who plays a naval commando. Sunny Deol also spoke about not being on speaking terms with SRK after the film, clarifying that he and SRK never ran into each other because he 'anyway (doesn't) socialise much.'

Speaking about the climax scene, Sunny Deol said, "I had a heated discussion with Yash Chopra regarding that scene. I tried explaining that I am a commando officer in the film. My character is an expert and fit, then how can this boy beat me easily? He can beat me if I can't see him. If he can stab me while I am looking at him, then I won't be called a commando."

Unable to convince Yash Chopra, Sunny Deol said he stepped aside and put his hands into the pocket of the jeans he was wearing. "Soon, out of anger, I didn't even realise that I had ripped my pants with my hands," Sunny Deol said and explained that this incident gave rise to the reports that everyone on the film sets was afraid of the Ghayal actor.

When asked about not speaking to Shah Rukh Khan for 16 years after the film released, Sunny Deol said: "It's not that I didn't talk but I just cut myself off and I anyway don't socialise much. So we never met, toh baat karne ki baat he nahi hai." Sunny Deol also said that contrary to the reports, he never received another offer from Yash Raj Films.

Darr released in 1993 when Sunny Deol was at the peak of his career while Shah Rukh Khan was just eight-films-old in the industry. SRK played an obsessive stalker to Juhi Chawla's character Kiran, who was married to Sunil, played by Sunny Deol. Darr is arguably considered to be the film which cemented Shah Rukh's position in Bollywood, not least because of the memorable and much-quoted dialogue "K-k-k-k-kiran.".