"Daughters Are A Blessing," Writes Sunita Kapoor, Shares A Cute Pic Of Sonam And Rhea 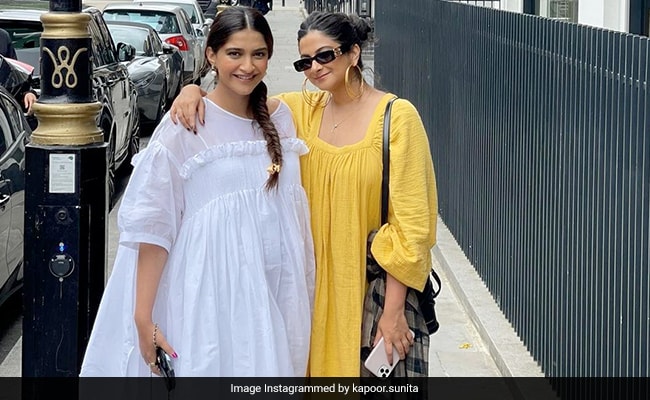 Sonam and Rhea posing for the camera. (courtesy: kapoor.sunita)

Sunita Kapoor has several reasons to be happy. The jewellery designer is soon going to turn grandmother with her eldest daughter, actress Sonam Kapoor expecting her first child. Even as she prepares for her new role, Sunita has shared an adorable post celebrating her daughters. In the image, a heavily pregnant Sonam is seen posing with her sister, producer Rhea Kapoor. Both the sisters – wearing pretty dresses – look stunning as they smile for the camera. In the caption, Sunita said, “Daughters are a blessing.” Along with her daughters, Sunita also tagged her husband, veteran actor Anil Kapoor in the post.

Late on Sunday, Sunita Kapoor even replied to an Instagram Stories uploaded by Sonam Kapoor in which the actress shared just how much she misses her mom. Reposting the throwback image, Sunita said, “Miss you more,” with heart emojis.

A few days ago, on the occasion of Sonam Kapoor's birthday, Sunita shared a bunch of throwback images of her daughter. She also penned an adorable note on the occasion. She said, “Happiest b'day my darling daughter (soon to be mommy). Love you so much, you are the best and most loving child any parent can have. In my eyes there is no one that can equal your beauty, and no words can describe how much you mean to me. Nothing that can lessen my love for you... No matter how old you might be, you will always be my little girl to me. Love you to eternity.”

Before that, on the occasion of her wedding anniversary, Sunita Kapoor dedicated a love note to her husband Anil Kapoor. Attached to two images of the couple, the note says, “Happy anniversary husband. You're my best friend, my human diary and my other half. Here's to us, to our love , to our hearts and to our dreams and to many more adventures. Love you and miss you.”

Sunita Kapoor and Anil Kapoor have been married since 1984. The couple has three children – Sonam, Rhea and Harsh Varrdhan Kapoor.