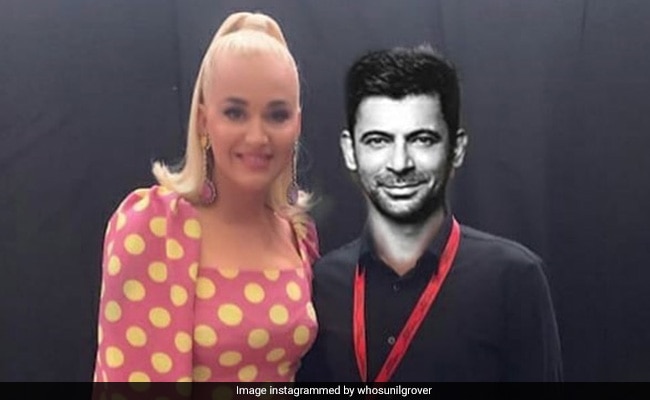 Katy Perry, who is all set to perform in Mumbai at the One Plus Music Festival tonight, recently met with several Bollywood celebrities at a lavish party hosted by filmmaker Karan Johar on Thursday night. Aishwarya Rai Bachchan, Kajol, Gauri Khan, Jacqueline Fernandez, Anushka Sharma, Kiara Advani, Sonakshi Sinha, Malaika and Amrita Arora, Arjun Kapoor, Shahid Kapoor, Mira Rajput, Neha Dhupia, Ananya Panday and many other celebrities attended the party. Bharat actor Sunil Grover, who wasn't present at the party, did something interesting to make his presence felt. Thanks to Photoshop, the 42-year-old actor placed himself next to the singer in an edited picture. Sharing the picture on Instagram, Sunil Grover wrote: "Like everyone else I am also with Katy Perry. She is very colourful and humble."

Like everyone else I am also with @katyperry . She is very colourful and humble.

Aishwarya Rai Bachchan posted a picture along with Katy Perry, from Karan Johar's party and she wrote: "More power to you." Check it out here:

A post shared by AishwaryaRaiBachchan (@aishwaryaraibachchan_arb) on Nov 14, 2019 at 11:33pm PST

Speaking of performing in Mumbai, Katy Perry, said, "I am so happy to be returning to India and excited to headline my first-ever performance in Mumbai. I am looking forward to seeing and singing with all of my Indian KatyCats at the OnePlus Music Festival," she had said in a statement earlier, reported IANS.