Sanjay Kapoor shared the post with a heart emoticon on Monday, a day after Sridevi's death anniversary 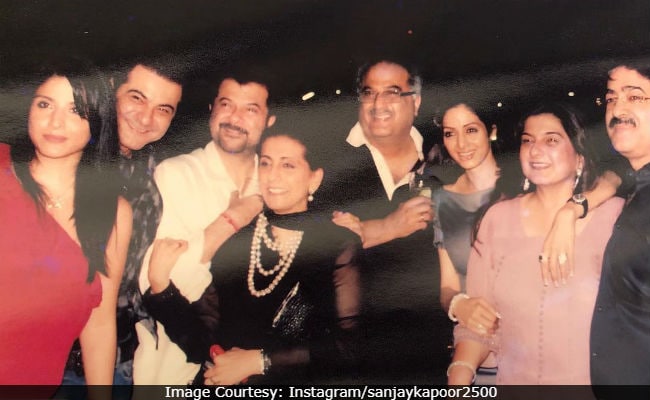 A file photo of Sridevi with Boney, Anil, Sanjay, Sunita, Maheep Kapoor and others (Courtesy: Instagram)

Actor Sanjay Kapoor remembered her sister-in-law Sridevi with an old family picture, also featuring Boney Kapoor, Anil Kapoor, Sunita, Maheep and Reena and Sandeep Marwah. Sanjay Kapoor shared the post with a heart emoticon on Monday, a day after Sridevi's death anniversary (February 24). She died at the age of 54 in Dubai last year after drowning in her hotel bathtub. Sridevi was married to Boney Kapoor and Janhvi and Khushi are their two daughters. On Sanjay's post, his actress niece Sonam Kapoor also posted a heart emoticon. Sonam is Anil and Sunita Kapoor's daughter. The happy picture appears to be taken years ago and the Kapoor siblings pose with their respective spouses in it. Sridevi is seen sandwiched between Boney Kapoor and sister-in-law Reena Marwah.

On Sridevi's death anniversary, Janhvi shared an emotional post for her mother and wrote, "My heart will always be heavy. But I'll always be smiling because it has you in it."

Sanjay Kapoor's wife Maheep also shared a set of pictures to remember Sridevi and captioned them, "Will always remember the good times."

Will always remember the good times

In our prayers and our hearts forever

Sridevi, in a career spanning five decades, featured in 300 films. 2017's MOM was her last film as a lead actress, for which she also won a National Award (posthumously). Her daughter Janhvi is also an actress. She debuted in the film industry with 2018's Dhadak and currently has a biopic on IAF pilot Gunjan Saxena and Karan Johar's Takht in the pipeline.